Manchester United have been linked with the Swedish superstar Zlatan Ibrahimovic over the last few weeks and it seems that the player is destined for Old Trafford.

Recently, this Swedish teammate John Guidetti dropped a major hint about the player moving to Manchester.

Guidetti is a former Manchester City player and during a discussion with the press about Zlatan, he revealed that the 34 year old will settle in just fine at Manchester and in the Premier League.

Although he did not mention Manchester United in particular, it is evident that Ibrahimovic is not joining City, especially with Pep Guardiola in charge now. Zlatan struggled to get along with Guardiola during his time at Barcelona.

Guidetti also mentioned that Manchester United’s young players will benefit a lot from playing alongside Zlatan.

“I think he knows the Manchester weather like I do,” said Guidetti.

“He is fantastic, great. The way he speaks with all the younger players, the way he demands quality, it is a true pleasure to play with him.”

In other news, it seems that Manchester United have wrapped up the signing of the talented Dutch winger Tahith Chong.

Earlier this year the Dutch media confirmed that the Red Devils have won the race for the Feyenoord player. Manchester United beat the likes of Arsenal to the signing of Chong.

Back then, Dutch newspaper AD confirmed that the player will end up at Manchester United. However, the player distanced himself from a move away from Holland.

Chong himself confirmed Manchester United’s interest in him and claimed that he would rather stay at Feyenoord and that he was having talks with the club about his long-term future.

Earlier in 2016 the Premier League giants managed to convince the young midfielder to sign for them. Chong impressed the Manchester United scouts while he was at Carrington during the U17 Premier Cup last summer.

Chong confirmed the move himself earlier in April this year. But there was no official announcement.

He said: “It was my intention to stay at Feyenoord, but no plan was made for me. When I said I wanted to leave, they made a plan. That was too late. At Manchester United I had a better feeling. You can feel it immediately when you walk in a club.”

Now the player has provided yet another confirmation of his move. He changed his Instagram bio to ‘Future player of Manchester United’. 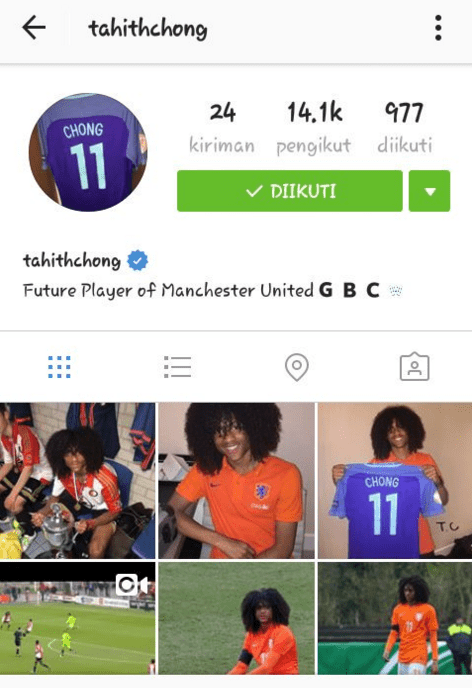