Manchester United manager David Moyes has been on a scouting mission again. He has been to Italy and Germany before, and now reports emerging that he was in Portugal last night to watch Benfica beat Porto 3-1 in the semi-finals of the Taca de Portugal.

Over the last 12 months or so, players from Portuguese league have been heavily linked with a move to English clubs. The likes of William Carvalho, Jackson Martinez, Rodrigo Moreno, Markovic et al are some of the names we have covered at Soccerlens on a regular basis.

Manchester United have been linked with several players from Portuguese Liga as well. The Red Devils are in need of a complete squad overhaul while manager David Moyes will be given a reported transfer war chest of around £200m. So, rumours are bound to follow, when he goes on a scouting trip.

Portugal newspaper O Jogo has reported this morning that Moyes was scouting Ezequiel Garay, Nicolas Gaitan and Eliaquim Mangala – players having a combined value of over €110m – if their reported buy-out clauses are taken into consideration.

Garay has been a long term target of Manchester United. The Red Devils have sent scouts on numerous occasion to watch Benfica players this season, including the Argentine defender. Back in November, O Jogo and A bola both claimed that Manchester United were plotting a move for Garay and his team-mate Gaitan. 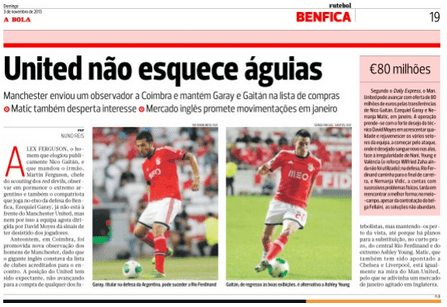 During the January transfer window, it was reported that Garay, who has a reported release clause over €20m, is unwilling to extend his contract at the Estádio da Luz, while A Bola claimed his move to Manchester United could be a possibility.

The case of Gaitan is interesting. Back in April 2012, Jason Burt of The Telegraph published the story that says Manchester United have agreed a deal to sign Gaitan, while Fabio and Macheda could be included in the deal as a part exchange.

Well, it was utter nonsense though, but Gaitan has been linked quite frequently. Back in December, Benfica president revealed any interested party will have to pay his release clause, which as we know is something in the region of €40-45m.

Also during the January transfer window, Portugal newspaper Record claimed that United, who were then close to signing Juan Mata, are also looking to bring in Benfica’s Gaitan, as Moyes looking to revamp his midfield options.

Mangala has been a reported target of Chelsea and Arsenal in the past, but during in the January transfer window, Manchester City tried to secure a deal on the deadline day, which didn’t materialise.

Manchester United are in need to reinforce their defensive options with club skipper Nemanja Vidic leaving the club at the end of the season, but will have to fork out over €50m, if they’re serious about landing Mangala.