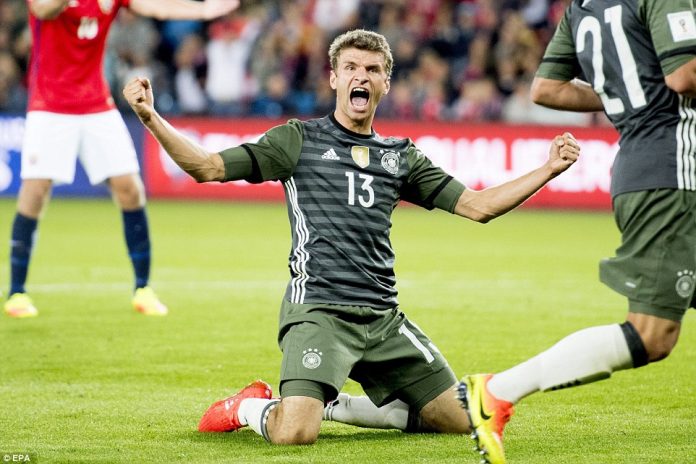 Bayern Munich attacker Thomas Muller has been linked with a move away from the Allianz Arena in the past.

The German international has been a star for his club and country for a few years now and the likes of Manchester United were reportedly interested in his services.

Speaking to the media in an interview, Bayern Munich’s finance partner Jan-Christian Dreeson has now confirmed that Manchester United’s interest in Muller was genuine.

The Bayern Munich employee also revealed that the Old Trafford outfit had a massive bid rejected during the summer transfer window. Apparently, the Red Devils submitted a £85 million bid for the player. Dreeson has also confirmed that Muller is a key asset for the club, therefore, United’s bid was turned down straight away.

Manchester United then went on to sign Paul Pogba for a world record fee of £89m along with Eric Bailly (£30m) and Henrikh Mkhitaryan (£28m)as well.

There really was something like that (an £85 million offer). Then came a fax from England. For us, however, a sale of Thomas Muller was never discussed. If a player fits us, we would be stupid to give him a short-term prospect of a record profit and to weaken him.

The World Cup winner with Germany has had a difficult season with Bayern so far and has scored just 4 goals in 26 appearances for Carlo Ancelotti’s men.

It will be interesting to see if Manchester United decide to renew their interest in the player at the end of this season. Despite a poor season so far, Muller remains a world class footballer on his day and would be an asset to most teams in world football.