Despite a couple of brief spells of discomfort, Manchester United brushed aside Watford with irresistable ease and booked a place in the 19th May FA Cup final at Wembley.

This treble business, it seems, will continue till at least 1st May, when Manchester United play Milan in the second leg of their semifinal at San Siro.

You can catch the match reports from BBC Sport and Reuters – I’m more concerned with talking about the goals (as always) and the injuries we suffered in the game and what that might mean for us in the last few weeks of the campaign.

Before I do that though, there are a few players that must be praised. 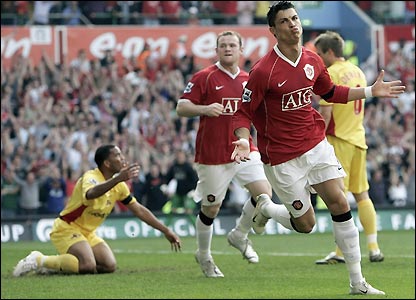 Rooney and Ronaldo – for the two friends who have , quite literally, made this season count for Manchester United. 40 goals and 25 assists between them, and that’s just the on-the-ball stuff.

Kieran Richardson – for scoring with conviction and showing hints of turning into a decent player if he’s given more time on the pitch.

Alan Smith – I have questioned Smith’s place once or twice this season, but he has been absolutely fantastic in his comeback. The only flaw I’d find in him is his over-the-top unselfishness that makes him pass the ball in front of goal instead of shooting. Still, his assists can help Rooney score, and with him and Rossi and Ole around to support Saha and Rooney we don’t need no Torres 🙂

Carrick – for always sitting back when the whole team was pushing forward and calmly cleaning up every mess.

Brown – for marshaling the defence after Rio left.

Here are links to all the goals: 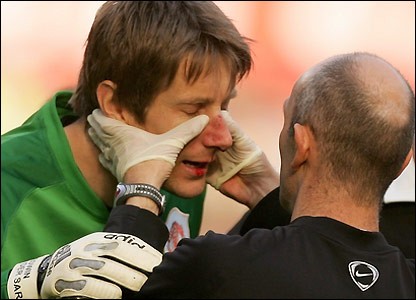 There’s van der Sar who had a bloody nose right before Watford’s goal – hopefully he’ll be fine although in Kuszczak we have a decent replacement.

And with Rio on the doctor’s table that leaves United’s defence short of 3 first-teamers and 2 backup defenders. Nev, Rio, Vidic, Silvestre and O’Shea are all out, and this is in addition to the injuries to Park Ji-Sung and Louis Saha.

Time to panic for Manchester United? I don’t think so. We’ll know more by Monday where we stand with Rio and O’Shea. Park is slated for a return before the Milan game and so are Nev and Saha, while Vidic is out till May at the least and Silvestre is out for the season.

United now have Brown, Heinze, Evra and Cathcart available in defence plus Richardson who can play left-back.

It looks bleak, but without anything certain on Rio, there’s no cause for concern. This year every time United have had a setback we’ve come through and recovered by being even stronger.

Bring on Sheffield United and Middlesbrough.