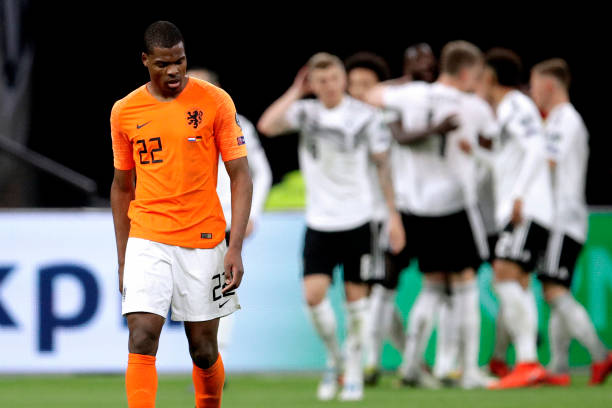 According to The Sun, Manchester United are interested in PSV Eindhoven right-back Denzel Dumfries this summer and can secure his services for £25 million.

Manager Ole Gunnar Solskjaer wants a new player in the position following the exit of Antonio Valencia, and with moves for Paris Saint-Germain’s Thomas Meunier and Crystal Palace’s Aaron Wan-Bissaka hitting the stumbling block, the Norwegian sees the 23-year-old as an alternative.

The Netherlands international featured in the semi-final of the UEFA Nations League against the Three Lions, and has established himself as a starter for both club and country.

Dumfries scored four goals and assisted six others in 34 Eredivisie games for PSV last season, and could end up being a hit at Old Trafford should a move go through.

He fits the profile – young and passion-driven – of players Solskjaer wants as he looks to rebuild the squad this summer, but it remains to be seen if a concrete move for him is on the cards considering the many players United get linked with every other day since the transfer window opened.

A lot of Red Devils faithful on Twitter aren’t keen on Dumfries, though, and here is how some of them reacted to the report linking the Dutch with the Theatre of Dreams:

Was about saying the same thing. They finished him in that game?? we don't want

He looked worse than Phil Jones V England , Dalot is much better

The bloke is 12 yellows and 3 reds a season.

Awful player. Weak link in that Dutch side against England by a million miles.

Utter rubbish, Diego dalot is already a better right back than him and we are buying someone to replace dalot!

Denzel Dumfries: Has committed the most fouls in the Eredivisie since August 2017 (136), at least 13 more than any other player in that time

This guy looked like he didn't get what game he was supposed to be playing. So, he would fit it well with the current Utd defence