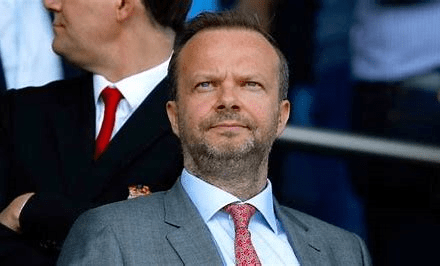 According to talkSPORT presenter Alex Crook, Manchester United have started their search for Ed Woodward’s replacement.

The Red Devils have identified Southampton CEO Martin Semmens as one of their candidates, while Norwich City Sporting Director Stuart Webber is also on their radar.

As discussed on @talkSPORT #MUFC have started their search for Ed Woodward’s replacement. Likely to be an external appointment with Premier League experience. Stuart Webber #NCFC and Martin Semmens #SaintsFC both admired. Told it won’t be Paul Barber who is committed to #BHAFC

Man Utd vice-chairman Woodward is set to leave Old Trafford at the end of the season, and the Red Devils have to bring in a replacement that can do a better job than the 49-year-old.

The English accountant and investment banker has been the club’s executive vice-chairman since 2012.

It is believed he is stepping down owing to the criticism the Red Devils received after deciding to join the European Super League.

Semmens has been the vice-president of Southampton since June 2019 and has helped the Saints further establish themselves in the top-flight.

Webber, 37, joined Norwich in 2017, and he has helped them return to the Premier League again after they got relegated last season.

The Canaries Director of Football was previously Head of Football Operations at Huddersfield Town and was the Director of Recruitment at Liverpool between 2009 and 2012.

Webber was Head of Scouting at Queens Park Rangers and later Wolverhampton Wanderers after leaving Anfield, and he could be more than keen to join Man Utd should they come calling.