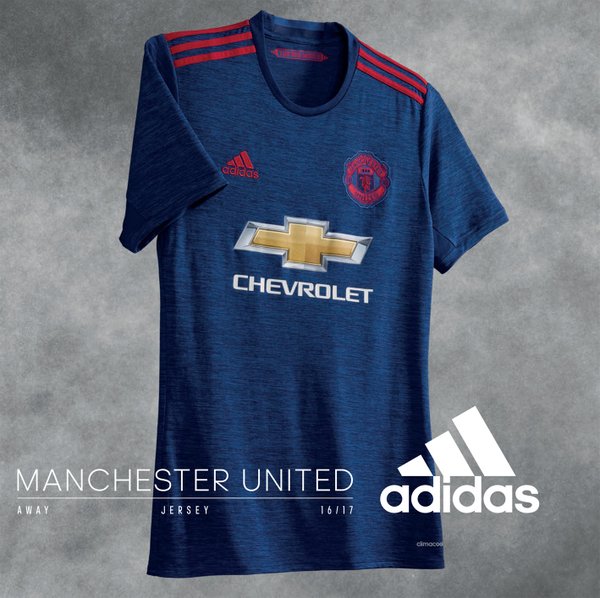 The Red Devils have released the brand new Manchester United 2016-17 Away kit on May 11, 2016, ahead of the home shirt, which is yet to be released.

Adidas, in his second year of the £750m record-breaking deal with Manchester United, has taken an inspiration from iconic kits throughout the history of the club, while preparing the new kit. The 16-17 away shirt will be debuted in the pre-season game against Borussia Dortmund in July.

Manchester United defeated Benfica to become the first English side ever to have won a European competition. The use of red club crest, a ‘Red Devils’ detail visible on the inside of the shirt, and use of a distinct all-over print, gives a classical feel to this 16-17 away shirt.

Can’t wait to get to play in this kit next season @adidasuk ? ? https://t.co/fer1kiCypt

Under Sir Alex Ferguson, Manchester United wore an all-blue third kit during the 2008-09 season. It was a very successful year in United’s history as they won the Champions League defeating Chelsea in the final, in addition to their Premier League glory.

The red accents of the Adidas performance logo and the three stripes on the shoulders gives a fine visual appeal to the Manchester United 2016-17 away shirt.

It is accompanied by a plain, dark blue shorts while the 2016-17 Manchester United away kit socks come in the same colour and follows the same pattern as the new United 16-17 away shirt.

The replica shirt is priced on the official United online shop at £60. The shorts are priced at £30 for adults and £25 for kids, and the socks £13. The full adult replica kit will cost fans £103. 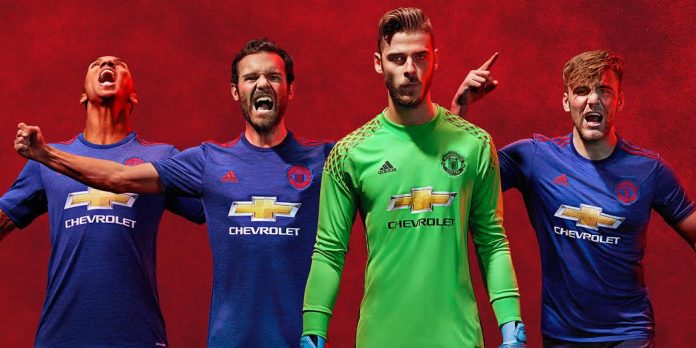 There is also an ‘authentic’ version of the kit identical to that worn by the players is also available. It is priced at £89.95 for the shirt and £35 for the shorts. A green goalkeeper strip, with a black club crest has also been modelled by David de Gea.

It remains to be seen whether United will be wearing the 16-17 away kits on Champions League match days, as the Red Devils are struggling to qualify for the Europe’s premier club competition following their 3-2 defeat at the hands of West Ham on Tuesday night.