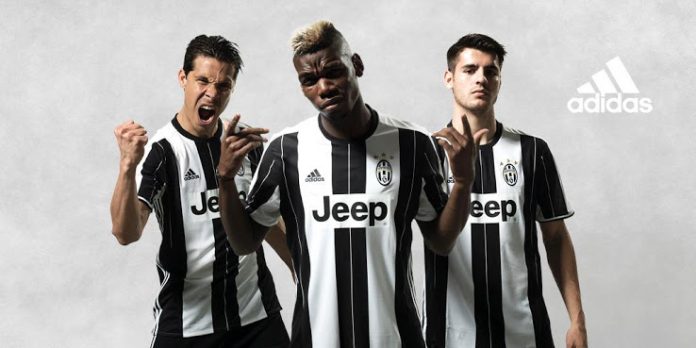 The brand new Juventus 2016-17 home kit was released on May 14, 2016. Once again, the kit has been manufactured and designed by Adidas while Jeep continues to be the main sponsor for the new Juve 16-17 home, away and third kits.

Adidas became Juventus’ main kit supplier at the start of 2015-16 season and have a deal with the Bianconeri until 2021. The new 16-17 home kit design interprets the spirit of Juventus in a more innovative way while remaining loyal to the club’s traditions.

The Juventus 2016-17 home kit features a brilliant combination of black and white strips. The new home shirt features two white and three black stripes on the front. The traditional black stripes crossed by a thin white line convey a more dynamic look to the jersey’s design.

The 16-17 home jersey comes with a crew neck collar featuring the black Adidas logo on the right and the Juventus crest on the left.

The iconic Adidas three stripes running down the sides are white, placed on a black background, give a sense of continuity with the stripes on the shorts and socks. The stripping is also found on the sleeves while the shoulders are coloured white.

Similarly, the home kits are made of recycled polyester, which has a lower impact on the environment as it reduces emissions.

A big change is noted from the 2015-16 Juventus jersey, with the shorts and socks are black with white accents. It has been a memorable 15-16 campaign for Juventus, as they won the Scudetto for the fifth successive time to create a new Serie A record. The new 16-17 home kit made its debut in Juventus’s 5-0 win over Sampdoria on the final day of the Serie a season.