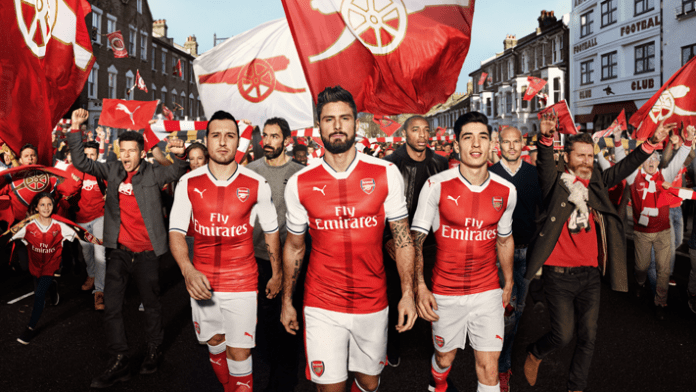 Arsenal football club have released their new home kit for the 2016-17 season.

The shirt, manufactured by Puma will have Arsenal’s traditional red and white colours, and will have a vertical stripe down the centre of the shirt in a darker shade of red.

Arsenal also announced that star player Alexis Sanchez will have a new number from next season. The Chilean will vacate his number 17 shirt in favour of the prestigious number 7.

Puma have priced the short-sleeved replica shirt at £55 and the long-sleeved version can be purchased for £60. However, the authentic match shirt will cost the fans an unbelievable amount of £100.

The new home shirt will be available to pre-order from Monday 23 May. The official release of the 2016-17 Arsenal home kit is on June 3.

The likes of Cazorla, Bellerin and Giroud showcased the new kit along with Thierry Henry and Robert Pires in the background.

Bellerin seemed happy with the design and quality of the kit and suggested that it would go down well with the fans.

Speaking about the new kit, Bellerin said: “We are really pleased with the way it looks. I think the fans are really going to like it. It’s a bit of a throwback as well. I like the design with the line in the centre, it’s something different. I’ve seen the players modelling it and I think it’s going to look really good.”