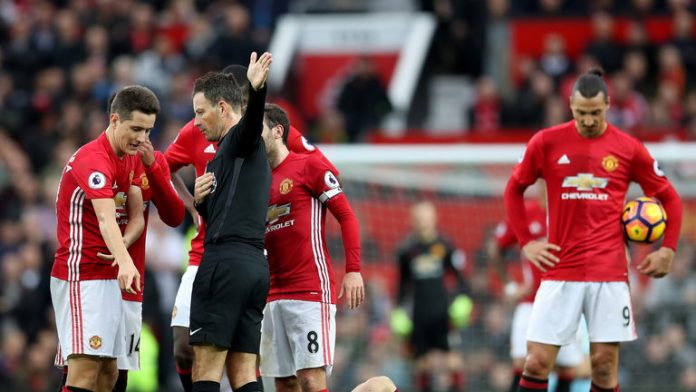 Manchester United played out a frustrating 0-0 draw with Burnley at Old Trafford last Saturday afternoon. They had 37 shots on goal but failed to convert any of them. Zlatan Ibrahimović and Wayne Rooney missed guilt-edge chances as the Burnley defence held firm.

José Mourinho‘s frustration boiled over as he was sent to the stands for his aggressive behaviour towards referee Mark Clattenburg while on the pitch, Ander Herrera was sent off after 68 minutes for two bookable offences (the second yellow was very harsh indeed).

So, what have we learned from Man Utd’s match against Burnley?

1. Zlatan Ibrahimović should be dropped

Zlatan Ibrahimović is really struggling at the moment. He has now gone 6 games without a goal. That is his longest streak without a goal since 2007.

Only a few months ago Ibrahimović looked like a bargain signing after bagging 4 goals in his first 4 games. Now he looks every bit of the 35 years of age that he is.

Ibrahimović’s current impotence in front of goal is a huge issue for Man United. He squandered four good chances against Burnley and his confidence looks shot. Ibrahimović like Rooney, should be benched.

But maybe there is a clause written into his contract that if fit, he has to start because on current form, Ibrahimović is not justifying his place in the Man Utd team.

Mourinho has persisted with Ibrahimović upfront and Marcus Rashford on the left wing despite Man Utd’s poor form and lack of goals. Though Rashford has done well on occasion on the wing and notched a couple of goals.

However, it is clear that Man Utd’s attack lacks dynamism and energy through the middle and as chance after chance went by against Burnley, Man Utd resorted to cross after cross rather than trying to use speed and skill to open up the Burnley defence.

So Mourinho should move Rashford into his favoured position to address this glaring issue.

Mourinho only has to look back to last season when Rashford excelled as a striker under Louis Van Gaal. He scored 6 goals in 12 games which included a double against Arsenal and the winner against Manchester City at the Etihad in the Manchester derby.

So if Manchester United have any ambition of winning the Premier League this season they need to move Rashford into the centre forward position sooner rather than later.

You would think that against Burnley, Henrikh Mkhitaryan would at least make the bench.

But again he failed to make the squad.

His situation is beyond bizarre.

Man United paid £27m for Mkhitaryan from Borussia Dortmund in the summer. He won the best player in the Bundesliga award last season and scored 20 goals and created 26 assists across all competitions.

Mkhitaryan was expected to be the attacking fulcrum of this Man Utd side. Instead, he has been reduced to just 105 minutes of action including a 20 minute cameo vs Hull – admittedly he did impress in that game – and a shocking 45 mins against Man City – were he was played out of position and looked unfit.

Since that game, Mkhitaryan has not played at all for Manchester United in any competition. But Man Utd look like they need him, as he could have unlocked a tight defence like Burnley’s.

If things do not change soon, Mkhitaryan will go down as one of the worst signings in Man Utd’s history.