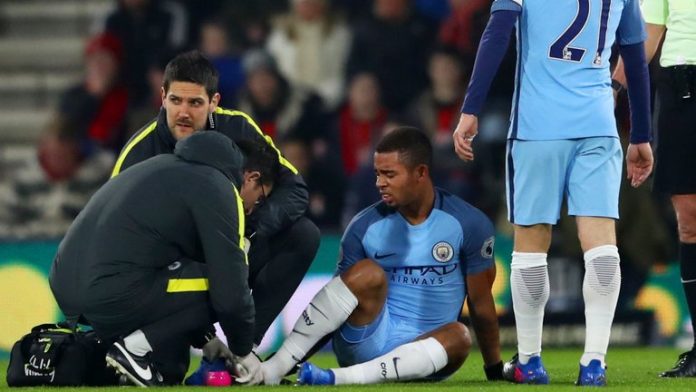 Manchester City forward, Gabriel Jesus, could miss the rest of the season after sustaining a foot injury. According to journalist Vero Brunati of Diario Sport, Jesus has broken his fifth metatarsal, and could be out for upto three months.

The report is yet to be confirmed by Manchester City, but usually metatarsal injuries take time to heal. And therefore, the report sounds accurate.

Jesus completed his £27m move to City in January, and has made an explosive start to life at the Etihad. He has hit the ground running with three goals in five appearances, and his injury will come as a huge blow to both club and player.

City are second in the Premier League and are still alive in the Champions League and FA Cup. So, naturally his absence will hurt City badly.

Pep Guardiola said after Monday night’s match that he was praying Jesus would only face a short spell on the sidelines. However, it seems that the Spaniard will have to rethink on his strategy without the Brazilian for the rest of the season.

Guardiola said: “It will be the morning before we know the impact. I can’t say anything else. We will just pray tonight it is not a big issue.”

He suffered a knock to his foot during City’s 2-0 win over Bournemouth. He was forced off with the injury after just 15 minutes, and that could prove to be his last appearance for the season.

If Jesus faces a long spell on the sideline, it will open the door for Sergio Aguero to impress his manager. Aguero was dropped to the bench in recent games that led to wild speculation about his future.