Liverpool defender Mamadou Sakho could be on his way out of Anfield this winter if recent reports are to be believed.

According to French publication L’Equipe, the Liverpool defender is not a part of Jurgen Klopp‘s plans and is set to leave the club during the January transfer window. The newspaper have not mentioned whether the player will leave on loan or permanently. Furthermore, there is no mention of a potential destination either.

Sakho has been training and playing for the youth squad over the last few weeks in a bid to regain his fitness. The Frenchman is a major fan favourite at Anfield and was even tipped to become the club captain at one point. However, the doping accusation towards the end of last season seems to have destroyed his Liverpool career.

Although he was absolved of all charges eventually, lack of game time for a considerable period meant that Klopp had to plan for life without him.

When he returned for pre-season, Sakho managed to upset Klopp with his attitude and was then sent home midway through the US tour. Sakho has not played a single first team match since then. The French international was even ignored for the EFL cup games where Klopp has played young players like Alexander-Arnold, Ejaria, and Grujic.

L’Equipe believe that Sakho’s Snapchat post a few weeks ago destroyed any chance of a comeback. Back in September, Sakho took to social media to dispel rumours surrounding his fitness. The general consensus back then was that the player is not fit enough and is therefore not a part of the first team. His actions upset the Liverpool manager once again, who branded the post as something negative. 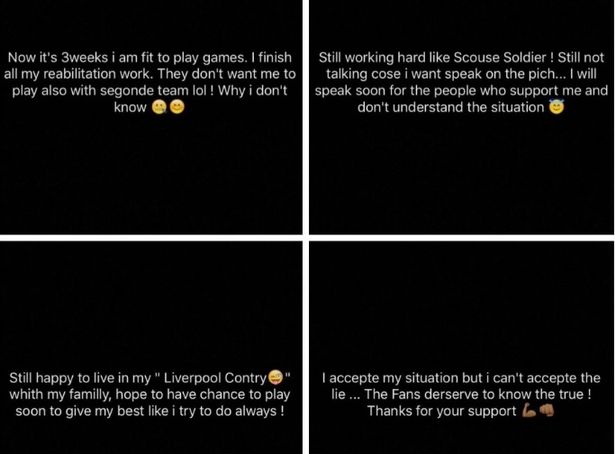 Nobody would blame Klopp if he decides to offload Sakho in the January window. Despite his obvious talent and love for the club, Sakho has done himself no favours with his Snapchat stories and misconduct during the pre-season tour.

Furthermore, a player of Sakho’s calibre needs to play regularly. With Matip and Lovren in the side, Sakho will find it hard to break into Klopp’s plans. Perhaps it is best for all parties if he moved on.