Liverpool midfielder, Lucas Leiva, is all set to complete his transfer to Inter Milan. Daily Mail are reporting that Liverpool have agreed to a deal with Inter for the 29-year-old midfielder.

Gazzetta Dello Sport are reporting that Liverpool have accepted Inter’s offer to loan the South American, and the Brazilian will undergo his medical in the next few hours. 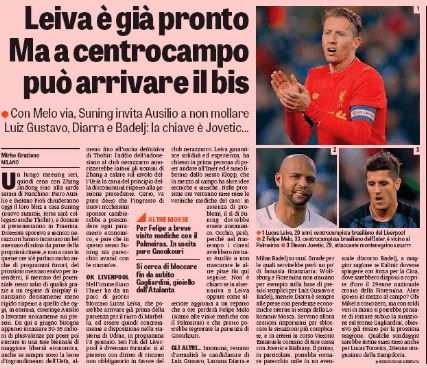 Apparently, Jurgen Klopp is happy with Joe Gomez‘s progress and is ready to use him as his backup centre-back from now on. Lucas was being used in that role previously, but it seems that Klopp is keen on promoting a youth player, rather than holding on to a high-earning fringe player.

Lucas earns around £80,000 per week at Liverpool and offloading him would be a masterstroke for the Reds. Inter Milan have the option to make the move permanent at the end of the season, and they will be hoping that the 29-year-old defensive midfielder can help them push for the European places, now.

This is Lucas’s 10th season at Anfield, and he has never managed to hold down a regular starting berth for himself. The Brazilian is nearing the end of his career, and this move could greatly benefit him. At Inter, he will get more playing time and might just have a chance of getting back into the national team. The report adds that Lucas will be available for Inter Milan’s trip to Udinese on the 8th of January.