Mark Ogden in his column for the Daily Telegraph has written that former United player Paul Scholes has claimed that Giggs would wait until the end of his three-year contract as Van Gaal’s assistant before becoming a manager.

However as replays suggested, Giggs appeared not to have been animated after United put in another unconvincing performance at St James’ Park but sealed an important away win in their bid for a Champions League berth for the next season. 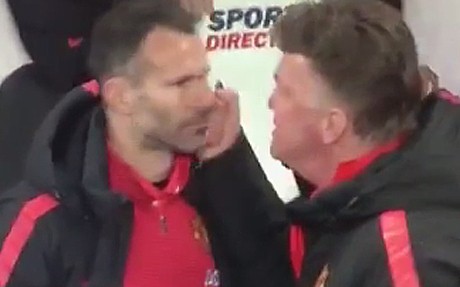 When asked about the incident, Van Gaal seemed irritated and responded sarcastically, “I cannot answer that because I want to have those rumours. No, we have a very bad relationship.”

The United manager however regained composure and then said, “Everyone can see we have a very good relationship. We work very hard together, not only Ryan Giggs, but all the staff and players. It is a way of suggesting things, but I am very irritated and I take this message against the media. I am not pleased.”

Giggs had earlier been hugely impressed when Van Gaal had offered former United winger a senior coaching role but with the latter’s over cautious approach and the side’ tasteless performances, despite splashing the cash in the summer, the 41 year old might have grown frustrated.

Scholes, has also claimed that his close friend is unlikely to wait patiently for the chance to manage on his own.

“There’s no doubt, he had that little taste of it for the last three weeks of last year and he definitely wants to be a manager. You can see that. Over the next two or three years, will he have the patience to be a number two for that long? I’m not sure he will.”