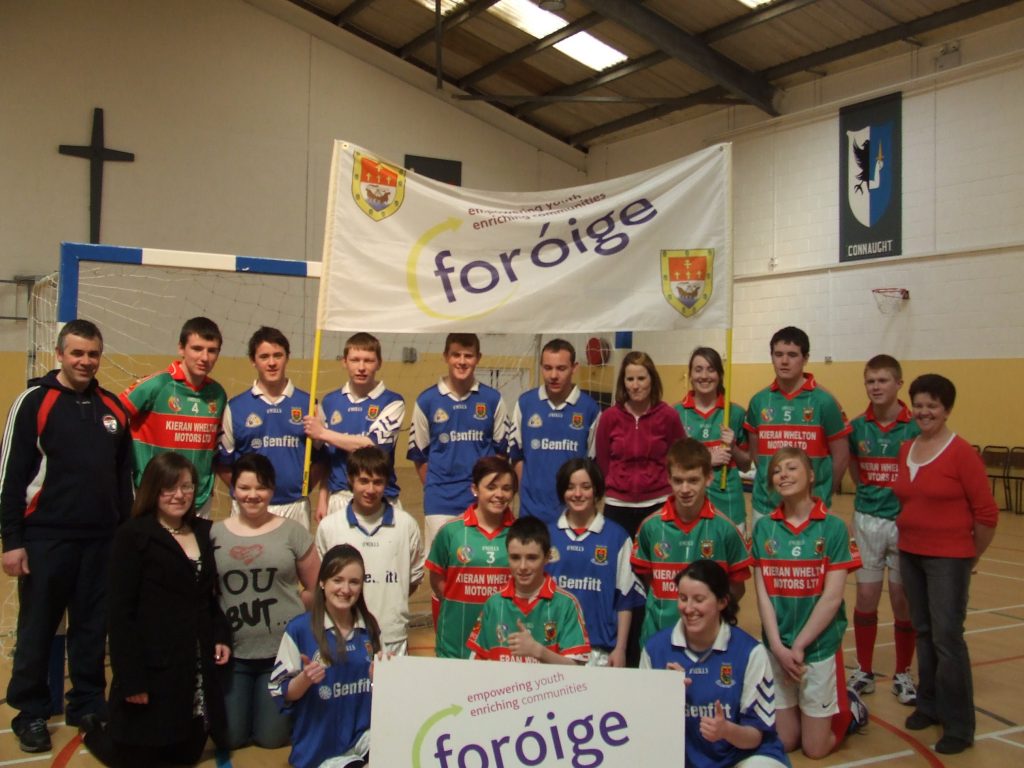 For everyone trying to convert that time into hours, it is in fact 33 hours! At 10:01 p.m. on 10th April 2010, our dream became a reality. We had officially broken the Guinness World record for Longest 5-A-Side Football (Soccer) Marathon.

As the clock struck midnight on 11th April, we had pulverized the record set only the previous week by men who were assisted my professional footballers of Liverpool and Everton football clubs, Jamie Carragher and Leighton Baines. Their record stood at 31 hours. With just 16 players, as per the rules given to us by Guinness World Records, we kicked off at 3:00 p.m. right on time and began what very few people thought possible. Even I doubted ourselves slightly.

At a meeting at our youth club the previous September in 2009 was when I first explained to everyone at the club about my idea and it was met with the consensus that we would relish the challenge to enter the coveted Guinness Book of World Records. We also decided on doing it as a fundraiser for the Special Olympics and our target was set at a hefty €5,000. Since then we had been planning and organizing it with meetings held every month. Closer to the build-up of the attempt, meetings were becoming more frequent as the final touches were being put on the event.

In the final 10 weeks we began undergoing rigorous and testing training. As nearly all of us who were participating were already playing one if not more sports, we didn’t have that many training sessions specifically for the World Record attempt. We had a few four hour sessions and from that is where my first doubts about our ability to achieve this mammoth task were born.

Our discipline was weak as we were killing ourselves by running as if it was your typical game out in the street! We were feeling the strain in our legs after only one hour in our first session. The week in the run-up to the attempt, we stepped up our training by doing an extra hour of exercise every evening. We were also given a strict diet to follow the week before the attempt which was mainly carbohydrate based and the consumption of plenty of water was also on the menu!

The day before the attempt itself, we all gathered up in the venue where we would attempt the record and had a short practice game where our destiny would lie. Again, discipline wasn’t great and doubts were still in my head. I wouldn’t sleep easily that night.

The planning of the event was stressful enough in itself. We had to acquire a suitable venue with the right dimensions and the right size goals. Fortunately we found all that in the one place less than 30 minutes from where we hold our meetings. It also had the added bonus of a large balcony overlooking the match as a fairly substantial crowd could overlook the event.

We also needed enough nutrition and liquids to keep us going for the duration of the event as well as sleeping bags for the subs on the sideline. We had to get sponsorship from our local supermarkets and chemists for all this and thankfully some members had sleeping bags. Then the matter of getting independent witnesses (who could have no connection whatsoever with any of the participants), referees, physios, doctors was yet another daunting task in order to get all them on board.

We also had to establish a publicity campaign around our surrounding area to provide awareness of our upcoming attempt through posters, Facebook groups and a webpage where anyone could donate online. We also sent letters to businesses asking for donations for this very worthy cause. I could go on and on about the incredibly huge amount of planning and organizing which had to go into this event which consumed so much of our time but then I’d have to create another article for that alone!

On 9th April 2010, the day had finally arrived. 8 months in the making, history was about to be made. That morning we were urged to stay in bed until at least 11 a.m. and try and make the most of the last good sleep we’d be getting. No chance of that for me as excitement and nervousness got the better of me! We all met up at the chosen venue two hours before kick-off to relax and familiarize ourselves again with the venue as only last night had we played our first ever game in it.

Everyone and everything was in place as the plan was being executed perfectly. We got dressed into our kit as it was the Green Giants against the Blue Army! We marched out into the arena led by a piper and to the roar of the eager crowd at 2:30 p.m. Because of several newspaper photographers all having to get their shots in, our warm-up had to be a very rushed one as the physio and club leaders gave us some final words of inspiration and advice as the clock ticked ever closer to kick-off time.

The stage was set for us to embark on the most difficult task we would ever encounter.

The attempt in pictures:

At precisely 3:00 p.m. the ball was set rolling as the tempo of the game was set. Agonizingly slow to my delight as we were much more disciplined than in any of our trainings. We raced into an early 4-0 lead and the rest I can remember isn’t very clear to be honest as I was too tired to recollect every detail perfectly!

Every single hour of constant play earned us a 5 minutes break so we accumulated the first 4 hours to have a 20 minute break, where we would have our one and only decent meal for the next 29 hours! For the first 4 hours, subs were being made constantly so the watching public would get a glimpse of everyone in action.

After that every 2 or 3 hours subs came on and off to ensure our rotation policy meant nobody got overtired. Our club leader had worked out a timetable for each player before we kicked off and for me and another of my team-mates we were scheduled to play the longest with the fewest amount of breaks.

We had 10 minutes break every 2 hours from then on until the end of the attempt. As the day we began the record went and we started a new day, the crowd had slowly dwindled away where there was only a few relatives and friends left in the balcony cheering us on, accompanied by an independent witness who was always on hand.

Of course, our club leader was always in the venue and the other leaders were also busy in making sure the event never got derailed in anyway. People were now getting tired and weary and the aches and pains in our muscles were setting in. Although when I went off for my 2 hour sleep one time, the amazingly refreshing effect it had on me worked wonders!

However, at 4 a.m. just before I was off again for another 2 hour sleep, I had serious doubts that we would make it. I literally could barely stand up any longer and I possibly would’ve collapsed if I didn’t get that rest. 2 hours later, I woke up still feeling very, very fatigued with tremendous muscles pains still.

I did my stretches and the pains were still there. I went straight into the play and tried to run it off but to no avail. I went in goal for a few hours where I struggled to stay standing as goalkeeper after goal flew by me! At 9 a.m. the next morning a few more supporters began to gather and the effect they had on me was unbelievable.

I felt re-energized, still had the muscles pains but felt much stronger mentally about achieving it. Overall by this time, everyone seemed much more positive as the boredom of the previous night of football with no cheering or shouting from the fans was leaving the system. As the clock approached 3 p.m. for the next day, our team really turned on the style as seemingly everything we tried worked out for us!

Volleys went in the top corner, flicks and tricks were being pulled off as if we were a bunch of Ronaldinho’s and goalkeepers were humiliated by our class! The support at this stage was particularly amazing as the cheers and applause made by 5 lads in the balcony was so motivating for us! It’s also incredible how long a full 24 hours drags on when you stay up for the majority of it!

As the evening came closer and the magical hour of 10 p.m. approached, the balcony was becoming wedged with people and both teams were playing as if they had only started such was the verve and swagger we were now playing with. Every goal was met with rapturous applause, every trick met with mad cheers and every mistake by a goalie met with shouts of ‘Wahey!’

As the clock hit 10p.m. the noise in the arena was almost deafening as we had equaled it! And a minute later with the record broke, they elevated the decibel level once more! We played on until that 2 hour session had been completed. As we went into the the kitchen, the crowd applauded us all the way down the tunnel and I was filled with an enormous sense of achievement and pride.

We had reached the promise land!

During that brief 10 minute period, we had our snack and discussed how much longer we would go on for. ‘Til midnight was what everyone had agreed on. If you’d asked me that 24 hours earlier, I would’ve asked for another pair of legs to get me through that period! We emerged from the tunnel again with great support from the crowd. The samba soccer restarted and I was hoping this wouldn’t end. As we neared midnight, the crowd began descending from the balcony and soon the corridor was filled with people waiting to run onto the pitch and congratulate us!

With seconds remained I got possession of the ball in midfield from our goalkeeper, turned around, took a tackle (tired to dribble past anyway at this stage!) and the ball broke away. I collapsed in a heap of pride and exhaustion as the whistle sounded full time! The crowd poured onto the pitch as we were congratulated by friends, relatives and well-wishers.

It took a while for the feeling to sink in but it was amazing when it did. More than 3 days later, I still had a few aches and pains in my body but it was well worth it!


None of this would’ve been possible without the help of any of our sponsors, Irish Red Cross, physios, referees, independent witnesses,

volunteers, the videographer, the many photographers or our parents and many more. A special thanks also to our club leaders who did an excellent job in ensuring everything went perfectly in terms of planning, organization and the event itself. In total we raised €5,407.78 for the Special Olympics which smashed our expectations and they were delighted with out work!

On 12 July 2010, our club had received official verification that we had successfully broken the Guinness World Record for the Longest 5-A-Side game.