Real Madrid are looking to sign a central midfielder this summer. After apparently admitting a defeat to Manchester United (well, Spanish newspaper AS claim they’ve actually let United to do the business) in the race to sign Paul Pogba, Los Blancos have shifted their attention towards signing Andre Gomes.

Gomes is a technically gifted midfielder and Madrid have earmarked him as a long term replacement for Luka Modric. Madrid, however, aren’t prepared to spend €65m (the fee asked by Valencia) for the midfielder, who is also a reported target of Chelsea and Juventus. The European champions would rather offer a figure relatively close to Valencia’s asking price, along with variable.

Valencia need to sell a few players to meet Financial Fair Play regulations, which in a way is an advantage for Madrid but the situation has been complicated with Benfica owning 25% of Gomes’ rights so Los Che won’t make it easy for the La Liga giants. 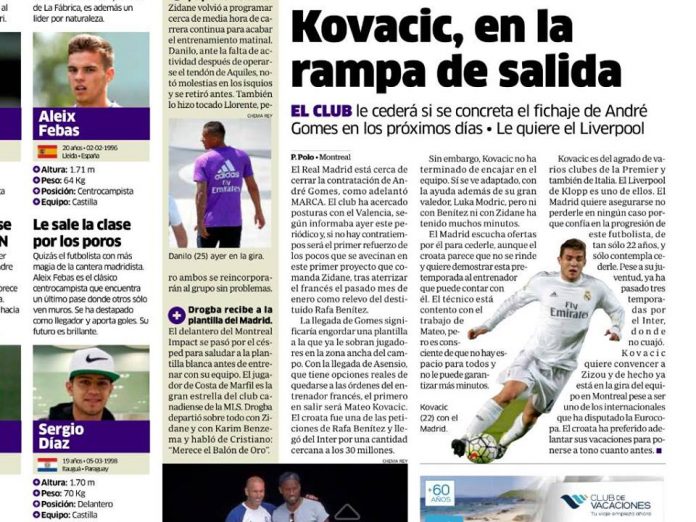 According to reports from Spanish newspaper Marca, Madrid will be looking to send Mateo Kovacic on loan, should they manage to sign Gomes from Valencia.

Several Premier League clubs are interested in Kovacic, including Liverpool but Madrid are only looking to send him on loan. Madrid paid €30m to sign Kovacic from Inter Milan and the Spanish giants rate him highly. Despite a difficult start to his career at the Bernabeu, the club believes in the Croatian’s potential and under no circumstances they are looking to sell him permanently at the moment.

Liverpool would be interested in signing Kovacic, albeit on loan, but for that to happen Madrid first need to secure the signing of Andre Gomes from Valencia.