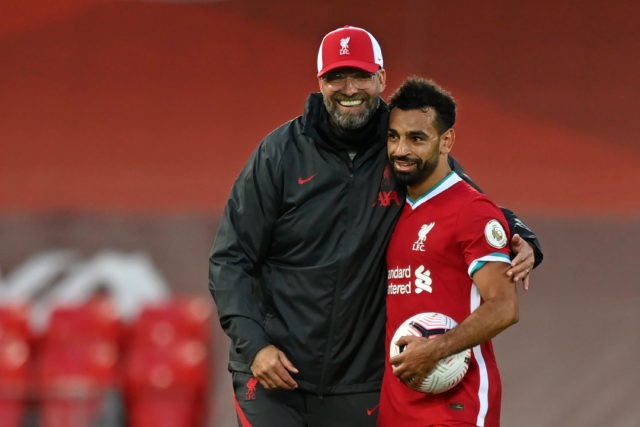 Liverpool star Mohamed Salah is nearing his contract at the Merseyside club and the Egyptian international has now revealed that he is keen on signing an extension with the Premier League giants.

The 29-year-old forward will be a free agent in the summer of 2023 and he has been linked with top European clubs like Paris Saint-Germain and Real Madrid.
Salah has developed into one of the best players in the world over the last few seasons and he has been in exceptional form for Liverpool this year.
Jurgen Klopp and Fenway Sports Group must do everything in their power to keep the Egyptian at the club for as long as possible and it seems quite surprising that they have not managed to secure an extension with the player yet.
Speaking to GQ during an interview, Salah has revealed that he wants to stay at the club but the situation is out of his hands and the club will have to sort out the agreement themselves.
The Egyptian also added that he is not asking for crazy money and it is more about recognition and his importance to the project.
He said: “I want to stay, but it’s not in my hands. It’s in their hands. They know what I want. I’m not asking for crazy stuff.”
“The thing is when you ask for something and they show you they can give you something,” he says, they should, “because they appreciate what you did for the club. I’ve been here for my fifth year here now. I know the club very well. I love the fans. The fans love me. But with the administration, they have [been] told the situation. It’s in their hands.”
The 29-year-old has broken multiple records since joining Liverpool from Roma and he’s on course for another record-breaking season this year.
Salah has 16 goals and nine assists to his name in just 20 Premier League appearances so far and he has seven goals in six Champions League outings.
Losing a player of his calibre on a free transfer would be a devastating blow for any club and it will be interesting to see whether Liverpool can sort out his contract situation in the coming months.
The Egyptian is undoubtedly the centrepiece of FSG’s project at Liverpool and the Premier League giants simply cannot afford to lose him anytime soon.
Join our Telegram channel to stay up to date on the latest in marketing