Liverpool speed up the chase to sign €20m defender

It seems like Liverpool are desperate to land a solid left-back in the summer. The Reds were heavily linked with a move for Sevilla’s Alberto Moreno and although they retain the interest, but are unwilling to match the price asked by the Andalusian club.

Sevilla have made it clear that any potential buyer will have to pay Moreno’s asking price, which Liverpool feel the price-tag is too much for the 21-year-old defender. 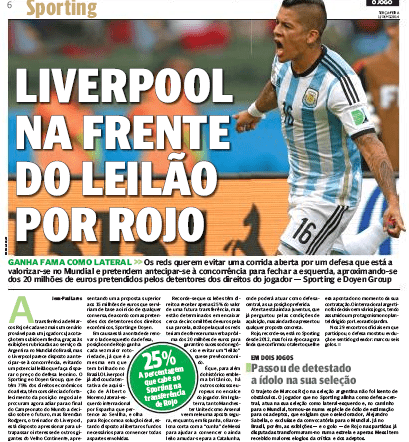 As a result of which, they have shifted their attention elsewhere. The Merseyside giants have followed Marcos Rojo for the past few months and now are looking to give that interest a more concrete shape by lodging a formal offer for the highly rated Sporting defender.

According to Portugal newspaper O Jogo, Liverpool are ready to speed up the chase to sign Rojo and are willing to pay €20m to secure his services.

Rojo’s market value has hiked up during the World Cup and Sporting and the Doyen Group, who co-own the player, want to wait until after the World Cup so that they can extract maximum price from this deal. Sporting only own 25% of his economic rights while the Doyen group owns the rest.