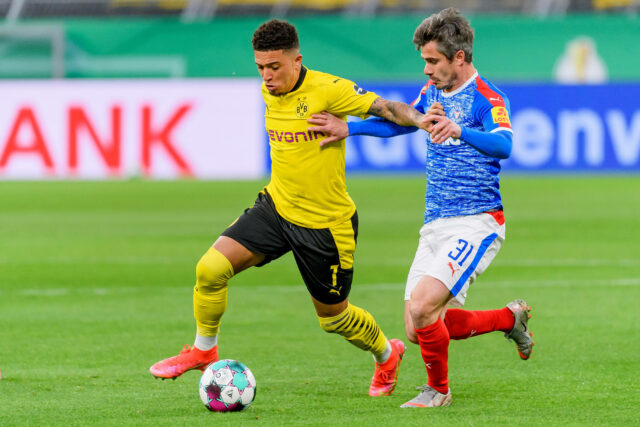 Liverpool and Chelsea are reportedly interested in signing Jadon Sancho in the summer transfer window.

According to German newspaper Bild, Borussia Dortmund are ready to cash in on Sancho.

The Bundesliga club could be willing to sell him at the right price after considering the financial aspects of the coronavirus pandemic.

Sancho was heavily linked with a move to Manchester United last summer, but Dortmund refused to sell him for anything less than €120 million.

However, they are now ready to sell him at a discount, with the fee thought to be in the region of €100m.

It has been claimed that Premier League duo – Chelsea and Liverpool – want to sign the 21-year-old winger, while United remain interested.

Sancho has been brilliant for Dortmund this season, bagging 12 goals and 12 assists in all competitions for the German club.

Liverpool are expected to bolster their attacking ranks in the summer, with the likes of Xherdan Shaqiri and Divock Origi set to leave.

However, the Reds cannot afford to meet Dortmund’s asking price unless they offload one of their front three.

The situation could change if either Mohamed Salah, Roberto Firmino or Sadio Mane leaves the club. Liverpool could then reinvest the money in signing Sancho.

Chelsea are well stocked for attacking players, although they could accommodate Sancho with Tammy Abraham and Olivier Giroud likely to leave the club this summer.

In other news, Tottenham have made an approach for Max Aarons.