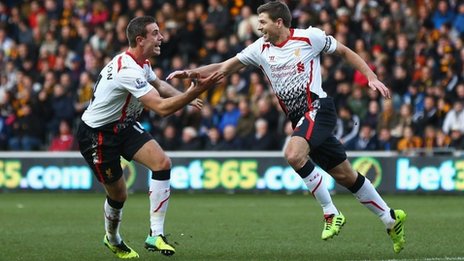 Hull City claimed their first ever win against Liverpool, as the Reds were beaten 3-1 at the KC stadium on Sunday in the Premier League.

The hosts took the lead in the 20th minute of the match, when Jack Livermore’s shot took a wicked deflection off defender Martin Skrtel. Liverpool skipper Steven Gerrard restored parity seven minutes later, when he curled in a brilliant free-kick but Liverpool paid the price of poor defending in the second half as David Meyler capitalized on it to put the hosts back in front.

In the dying minutes of the match, victory was sealed for the hosts when Martin Skrtel headed an own goal, ending all Liverpool’s hope of a possible come-back.

The Belgian shot stopper could do nothing to prevent any of the three goals. Hull City only had 4 shots on target, hence he didn’t have to make a huge number of saves.

It was pretty average performance really from the right-back. He hardly made darting runs in the opposition box while attacking wise didn’t provide any major threat – defensively, was dispossessed twice in the match.

The youngster doesn’t provide too much threat attacking wise, but no one can doubt his effort and commitment. 4 tackles, 6 clearances – it was yet another strong performance defensively from the local lad.

The Solvakian made 16 clearances today, all with success but was involved in an own goal that effectively killed the competition.

Like Skrtel, he also had a strong physical presence – made 11 clearances, 1 fine interception and 2 shots blocked – but he could have done better in preventing the second goal. With 67 passes and 91% passing accuracy – can’t say it was a bad performance by the Ivorian.

It was easily one of the most assured performances from the Brazilian thus far. With 3 tackles in the match, 2 interceptions and 3 clearances – defensively he was solid today. He played most number of passes in the match with 92% passing accuracy.

The Liverpool skipper scored a brilliant freekick and made some good runs in the box. With 86% passing accuracy and 7 clearances – it was better-than-average performance from the Liverpudlian.

It was that type of performance where you would say – he could have done more. Deployed in the middle in a 4-3-3 system, the England international managed only 37 passes in the match while attacking wise wasn’t a big threat either.

The youngster lasted only 66′ minutes. He only made 14 passes but most importantly was involved in 2 key passes in the first half. 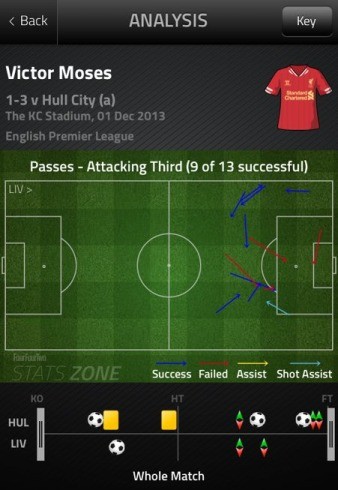 Deployed on the wings, Moses was involved in 9 successful passes out of 13 in the final attacking third. Still there wasn’t enough penetration from him and missed a golden opportunity to score in the second half as well.

The Uruguayan in Numbers: 67% pass accuracy, 0 take-ons, 0 tackles, 0 interceptions, 50% headed duel success & 0 chances created. It was his worst performance of this season so far.

Philippe Coutinho & Luis Alberto –  came on as a sub and didn’t make any significant impact on the match.