Liverpool have made a €20m offer for Real Sociedad’s highly rated central defender Inigo Martinez, according to reports from Spanish newspaper Marca.

Earlier this week, Catalan newspaper Sport claimed that Liverpool scouts were present to watch Martinez in action at the Camp Nou, where Real Sociedad lost 2-0 to Barcelona. Martinez didn’t have a great game that day but Sport suggested Liverpool were pretty impressed with what they saw. 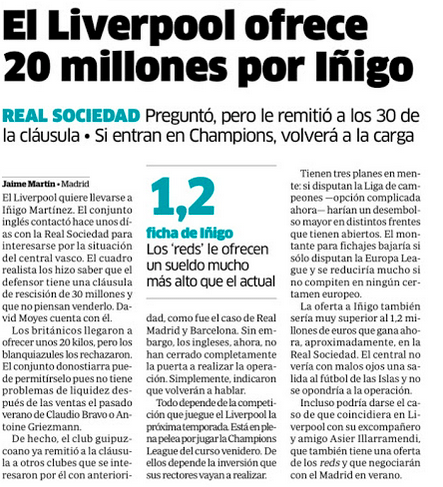 The Basque club have sold Asier Illarramendi, Antoine Griezmann and Claudio Bravo in recent transfer windows and they do need to sell their top assets at the moment. Furthermore, Martinez has a buy-out clause of €30m, and Liverpool need to pay that amount or get closer to prise him away.

Brendan Rodgers has urged the owners to back with cash in the summer, but with no Champions League football to offer, it seems difficult for Liverpool to pay such high price for the Spanish defender.

Martinez earns a reported salary of €1.2m per season and should Liverpool present him a better offer, he could be persuaded. Liverpool are also interested in Real Madrid midfielder Illarramendi.