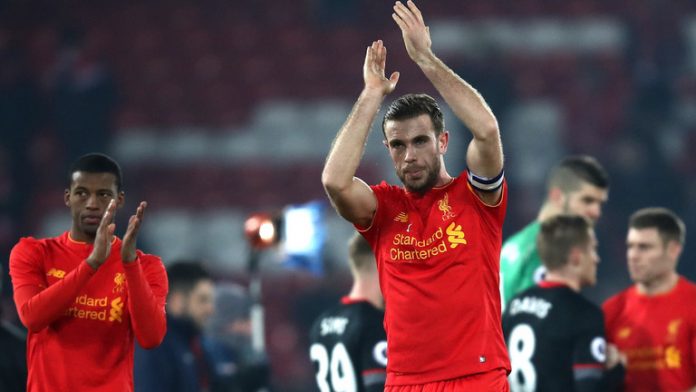 Club captain Jordan Henderson was expected to play a part against Everton tomorrow, but Liverpool Echo are reporting that the England midfielder will now miss Liverpool’s next three matches.

Henderson was recovering from an ongoing foot problem, but he has had a setback. The midfielder will need to be managed properly now or his injury could get worse. The Liverpool star will now miss the derby followed by Bournemouth’s visit to Anfield on Wednesday. He will also miss out on the trip to Stoke on Grand National day.

Jordan has unfortunately had a little setback, he’s not in team training up til now, that’s how it is. I can’t say in this moment how long – hopefully not too long. Yes I know when we were here last time I said I hoped he would be in training in this week but he wasn’t. So next week looks like this too, so we have to wait for this. It’s all a question of time unfortunately, there’s nothing we could do. It’s a situation, sometimes it’s not a big issue but big enough, with Hendo you know if there was a little chance that he could run, train, he would do it but we have to be really careful with him, that’s how it is. We cannot take a risk. It’s always too long with all injuries, perhaps it’s not the best time for us at the moment in this part of the game but nothing else to do.It’s the treatment he gets of course, the things you do of course and then wait for the moment when he’s back again.

Furthermore, Klopp has also confirmed that Daniel Sturridge is still sidelined and has not returned to training despite the recent reports. Apparently, the striker is doing rehab with the coaches right now.

The Reds lost Adam Lallana to an injury earlier this week and losing Henderson will now come as a massive blow. The former Sunderland player was expected to fill in for Lallana over the next few weeks.

Liverpool take on Everton in the Merseyside derby this weekend and 888 Sport are offering fantastic odds for new customers.