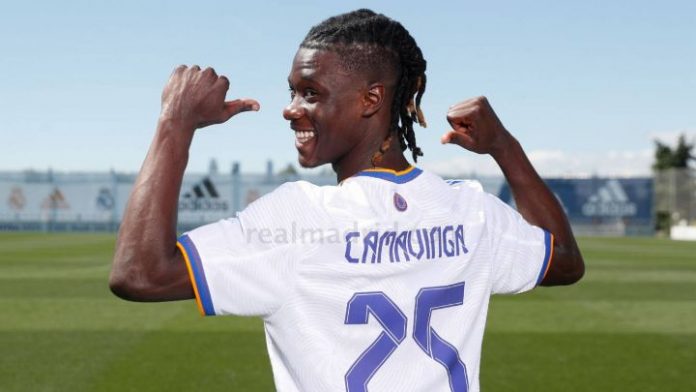 Liverpool are apparently looking to improve their midfield options at the end of this season and they have identified the Real Madrid midfielder Eduardo Camavinga as a potential target.

The 19-year-old midfielder joined Real Madrid at the start of the season but he has struggled to hold down a regular starting berth under Carlo Ancelotti so far.
According to a report from El Nacional, the France under 21 international is thought to be unhappy with the situation at Santiago Bernabeu and he could look to move on at the end of this season.
The player has a contract with Real Madrid until the summer of 2027 and it will be interesting to see whether the Spanish giants can convince him to stick around and push for a starting berth.
The 19-year-old is regarded as a world-class talent who has the potential to develop into a future superstar.
It is hardly a surprise that Premier League giants Liverpool are keen on signing him and he could prove to be a superb long term acquisition for the Reds if they can secure his signature in the coming months.
Liverpool are in desperate need of reinforcements in the central midfield especially with the likes of James Milner and Jordan Henderson in their twilight years.
Furthermore, the likes of Naby Keita, Thiago Alcantara and Alex Oxlade Chamberlain have been quite injury prone since joining the club and Jurgen Klopp needs to add more quality and depth to his midfield department.
Camavinga can operate as a central midfielder as well as a defensive midfielder. Apart from his passing ability, the 19-year-old has the technical ability to carry the ball forward and drive his team into the final third with his flair and agility.
Working with a world-class manager like Klopp could help the youngster develop further and achieve his tremendous potential.
Real Madrid will be hoping to hold on to the player at all costs and it remains to be seen how the Frenchman’s situation evolves at the Spanish club over the coming months.
Tags
English Premier League La Liga Liverpool Real Madrid Transfer News & Rumours