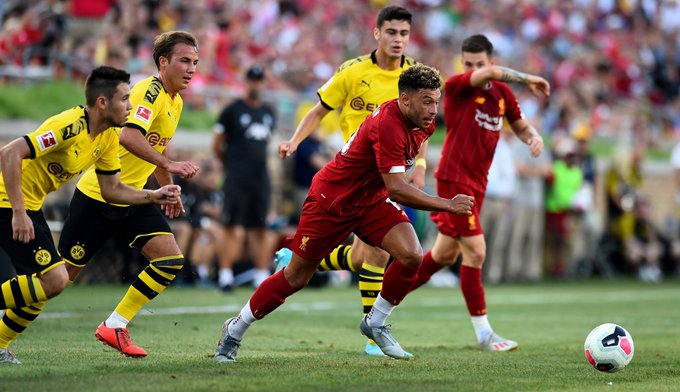 Liverpool suffered their first defeat of the pre-season after they lost 2-3 against Jurgen Klopp’s former club Borussia Dortmund at the Notre Dame Stadium in Indiana.

Paco Alcacer scored the opening goal for the German giants. The European champions equalised before the break when Harry Wilson scored from a fabulous through pass from Fabinho.

Thomas Delaney and Jacob Bruun Larsen scored in the second half for the Bundesliga giants. Rhian Brewster pulled one back from the penalty spot, but in the end, it wasn’t enough.

One player who particularly impressed during the game was Alex Oxlade-Chamberlain. The 25-year-old missed almost the entire 2018-19 campaign through injury, and only managed 19 minutes of Premier League action.

The 25-year-old former Arsenal midfielder was lively in the middle of the park and his performance demonstrates why Klopp is not keen to sign a new midfielder this summer.

Oxlade-Chamberlain is now fully fit and his return to the first-team squad is being treated as a new signing by the club. Some Liverpool fans took to social networking site Twitter to express their reaction about the England midfielder’s performance, and needless to say, they are heavily impressed.

Ox has been unreal

Missed Ox. So glad he’s back. He’s just got so much heart and hustle. #LFC

Ox probably my standout player in that half but I do like Larouci. Kent/Wilson are a threat too, could be good options. #LFC

The Ox is looking sharp. ? #LFC

The ox is on fire so far ?? #LFC #LFCPreSeason #LFCBVB

Ox masterclass this half pic.twitter.com/ejBn87VQw4