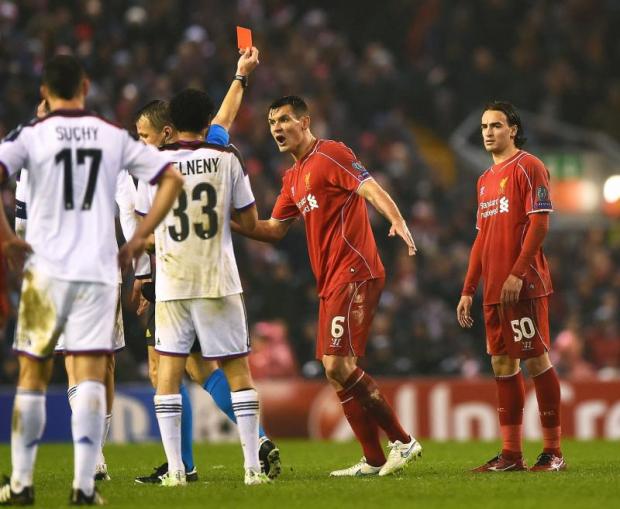 Liverpool Football Club has been left stunned by today’s announcement that Lazar Markovic will face a four-game ban for his finger nail flick on Basel’s Behrang Safari during their Champions League group match earlier in the season.

Uefa’s disciplinary committee has left themselves open to ridicule by imposing such an over-zealous punishment for the incident, which effectively helped to end the Reds’ participation in this season’s elite competition.

Safari’s disgraceful reaction in throwing himself to the ground like he had been smashed by an elbow was far more deserving of a four game ban than Markovic’s attempted hand-off as he went on a powering run.

Referee Bjorn Kuipers took the bait and brandished a red card without a second’s consideration, with him viewing it as violent conduct. One glance at Safari’s unblemished face would have told the story of the whole affair – that there was nothing to it. But once again a poor refereeing decision has been compounded by the authorities, who obviously feel obliged to stick by one of their own rather than look at the incident objectively and do what is right and credible.

In this case Uefa are effectively saying that there is to be no physical contact on another player’s face. But that is an absurd road to go down in an all action, fast moving sport where players use their arms and hands regularly to shield or jump for the ball, as well as for balance when running with the ball.

The end result in all this is that the Serb now misses both of Liverpool’s Europa League matches against Besiktas, as well as a further two games if they defeat the Turks. He would have been handed a three-game ban but Uefa took into account his red card for Benfica against Juventus in the semi-final of the Europa League last season.

The 20-year-old was understandably shocked by the draconian penalty – equal to what John Terry got for racially abusing Anton Ferdinand – and took to Twitter to register his disgust by simply posting: “4?”

The authorities will no doubt stand by the mantra they are merely upholding the laws and morality of the game, but their argument is undermined by their refusal to look at the cheating over-reaction of Safari, as well as the clear evidence there was minimal contact that was in no way “violent” or malicious.