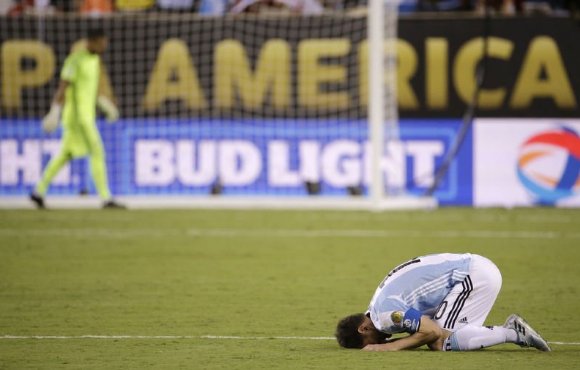 When Francisco Silva scored the winning penalty for Chile, Lionel Messi was seen kneeling on to the ground hiding his face, probably crying as well. He sat alone on the dugout bench with a look of a lost man. The five times Ballon d’Or winner was left distraught, heartbroken and shattered.

He is widely regarded as one of the all-time greats. He has won everything in club football with Barcelona. Despite all his heroics at club level, this one criticism that ‘he hasn’t won anything with Argentina’ puts a blemish on his trophy-laden career.

For the third consecutive year, Argentina have reached the finals of a major tournament and ended up as the second best team. Messi feels that he has reached the dead end of his career at international football and he has nothing more to offer.

“For me the national team is over. I’ve done all I can, it hurts not to be a champion,” Messi said after the match as quoted by the BBC.

Asked he was retiring, Messi said, “I tried my hardest. It’s been four finals and I was not able to win. I tried everything possible; it hurts me more than anyone, but it is evident that this is not for me.

“I want more than anyone to win a title with the national team, but unfortunately it did not happen.”

The 29-year-old has made 112 appearances for Argentina since making his debut in 2005 and became the leading goal scorer for his country breaking Gabriel Batistuta’s record of 54 goal tally.

Argentina were held to a frustrating 0-0 draw until 120 minutes by Chile, with both teams reduced to 10-men at half time. Messi was simply brilliant throughout the tournament and played well in the final too, but his missed penalty in the shootout will be a topic of discussion for ages.

The news will come as a shock to all the Argentina fans in the world as nobody wants to see Messi retiring so soon. He still has the age on his side to win something for his country but the question is can he come out of his psychological depression anytime soon?