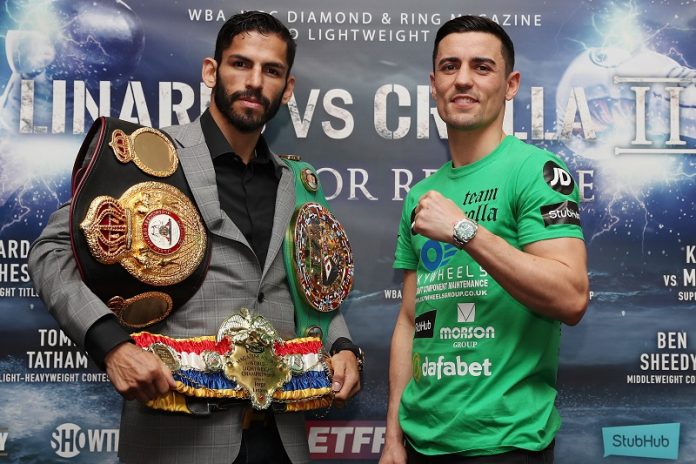 After the first fight, many questioned whether a rematch should take place. Though Anthony Crolla acquitted himself admirably in their first encounter and won maybe 4 rounds, Jorge Linares was a clear and comfortable winner.

This time around the gap widened as Linares moved into higher gears which Crolla simply could not match.

There was nothing between the fighters in the first round as neither gave much away. But from the second round onward it was apparent there was only going to be one winner – Jorge Linares.

Between rounds 2 and 6, Linares displayed incredible hand speed, wonderful footwork, great defensive skills and piercing precision punches which put Crolla on the back foot. All Crolla managed were a couple of weak body shots per round. This did little to disrupt Linares’ imperious rhythmical style.

There is a reason why Linares has the nickname ‘El Niño de Oro’ – ‘The Golden Boy’ in English and he demonstrated this perfectly in the first 6 rounds.

In the 7th round Linares almost brought the fight to a close with a sickening uppercut out of nowhere. It caught Crolla by surprise with its lighting speed, slipping through his high-held guard and clipping him on the chin. Crolla did a merry dance, like a drunken man after 10 pints as he stumbled before hitting the canvas. He did not know where he was. He showed incredible courage to get up. Crolla then withstood a barrage of heavy punches from Linares as he looked to close the show in style. Remarkably Crolla survived until the end of the round.

Surprisingly, Crolla came out fighting in the 8th. This was the first round that anyone could have scored for Crolla. He pressurised Linares, putting him on the back foot and landing a couple of fine shots flush on Linares’ chin and also to his body. That was as good as it go for Crolla unfortunately.

Again, Linares took charge in the 9th with his ridiculous lateral movement befuddling Crolla and forcing him to reset before throwing any punches. He threw very little as Linares danced around him pot shotting with precise, hard blows.

The 10th and 11th followed the same pattern. Crolla was now more desperate than ever. He was trying to pressurise Linares and force him backwards. He failed at this miserably. Linares was simply too good.  At the end of the 11th Crolla’s coach Joe Gallagher wanted to pull him out, as this one-sided affair reached its close. Crolla’s coach knew he could not win the fight as he had shown little to suggest he could KO Linares. But Crolla insisted he fought to the end. This showed his great desire and determination to last the full 12 rounds with an elite fighter.

Not much happened in the 12th as both fighters knew the outcome of the fight. After the bell rang both fighters shared a respectful hug. All three scorecards read 118-109 to Linares. It could have been wider, apart from round 8; no other round should have been scored for Crolla.

As many in the boxing community say ‘there’s levels to this game’ and Linares was simply on a different level to Crolla. The way he dominated this fight showed why he is a 3 weight world champion and one of the most talented boxers around.

Linares retained his WBA, WBC Diamond and Ring Magazine belts. He will now move on to bigger and better things with a likely, Las Vegas showdown with unbeaten 3 weight world champion Mikey Garcia.