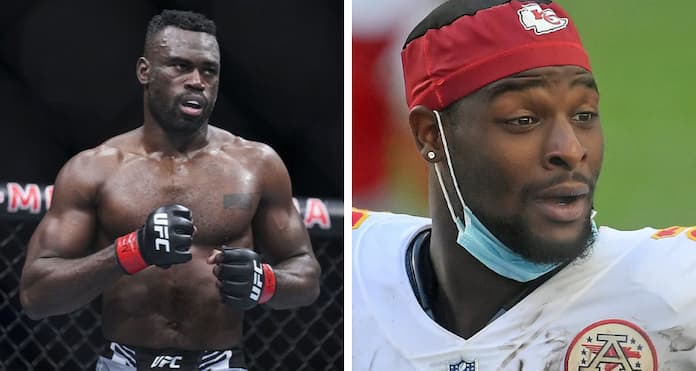 Uriah Hall will face NFL star Le’Veon Bell on the undercard of Jake Paul vs Anderson Silva on October 29th. The former UFC fighter will take on the former NFL running back in a few weeks time as the co-feature bout of the card.

Former NFL running back, Le’Veon Bell, enters the professional boxing ring for the second time. This time, he is up against former UFC fighter and MMA star, Uriah Hall.

Bell made his professional boxing debut last month, knocking out fellow NFL player Adrian Peterson in the fifth round of their highly anticipated contest. Bell clearly isn’t waiting around, as he enters into his second professional bout just six weeks later.

The fight against Uriah Hall in a few weeks time is a huge step up in class. Hall beat the likes of Anderson Silva, Gegard Mousasi, Thiago Santos and Chris Weidman in the octagon, who are some of the best middleweight fighters to ever set foot in the cage.

Although Hall hasn’t had a fight in boxing, he has a huge amount of experience in MMA and has some impressive wins on his resumé.

The fight will go down on the undercard of the Jake Paul vs Anderson Silva event in Arizona on October 29th, The Gila River Arena will be full to capacity to watch ‘The Problem Child’ versus the former long-reigning UFC Middleweight Champion. This fight between Hall and Bell will provide some sensational undercard entertainment for the fans in attendance.

Odds have been released from BetOnline, who make Bell the +400 underdog going into the fight. Hall goes into the bout as the overriding -600 favorite. Hall opened as a -500 favorite, but those odds quickly moved in his direction. Read the current odds and betting numbers below.

Haven’t claimed the Hall vs Bell betting offer yet? Don’t worry, take a look at the best betting sites and claim the best bookmaker free bets. Be sure to also check out the best offshore betting sites.

Here is a list of BetOnline‘s prices for the upcoming fight this weekend: