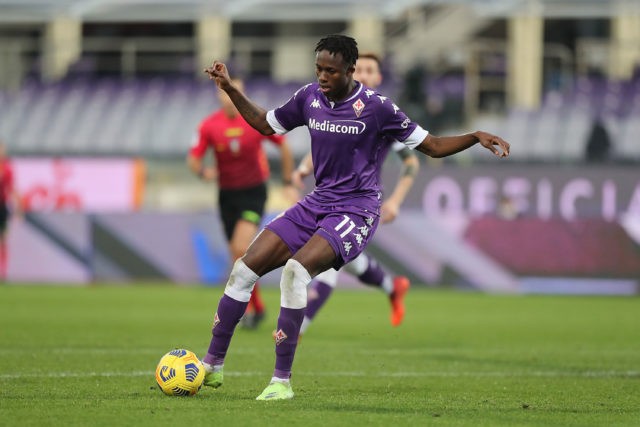 According to reports from Gianluca Di Marzio, Italian club Fiorentina are ‘considering the future’ of Christian Kouame.

A host of clubs have shown interest in signing the striker, including Verona and Turin. The 23-year-old forward has endured a difficult campaign but Fiorentina are unlikely to sell him this month, unless there’s a concrete offer.

He has made 19 appearances for La Viola this season, and scored in the Coppa Italia against Inter Milan.

Di Marzio claims that Fiorentina would only consider a bid of €20 million (£17m) or more to sell the striker.

SL View: Leeds unlikely to move for him

Leeds are unlikely to make any major signings in the January transfer window.

There have been suggestions from various pundits that the Whites should look to sign a striker who can be a reliable back-up option for Patrick Bamford.

Marcelo Bielsa could explore that area in the summer, but Leeds are unlikely to sign a striker this month.

The Whites can use Rodrigo Moreno, the club-record signing, as a striker, although he has mostly played in the attacking midfield areas.

Tyler Roberts could be another option for the Whites.

Leeds have done well so far since their return to the Premier League, and their primary focus is survival. Although an additional striker would have been ideal, it’s hard to see Leeds moving for Kouame in the January market.