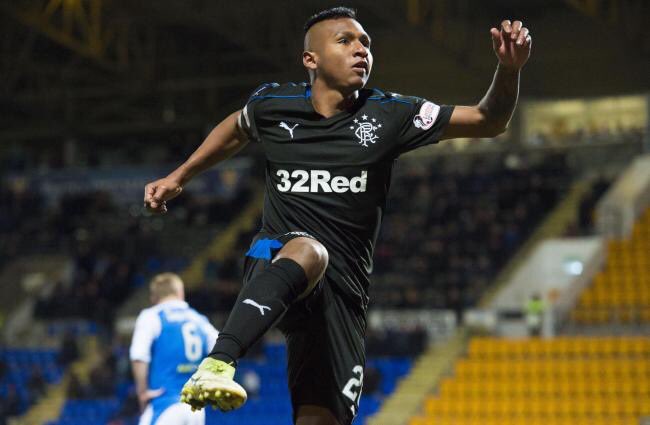 Glasgow Rangers striker Alfredo Morelos scored 18 goals last season in all competitions and he is backed to improve on the goal tally in 2018-19 for the Ibrox club.

Kris Boyd, the Gers legend, has told Herald Scotland, that he is confident Morelos can only hit the targets he reached last season, but even better it. He is expecting him to score around 25 goals this season.

The 22-year-old has been Steven Gerrard’s first choice striker and scored his first goal in the Scottish Premiership last weekend by scoring in the 2-0 win over St Mirren.

The Colombian has also scored two goals in Europa League qualifiers which means he has taken his goal tally to three already.

Boyd says that Morelos brings something different to the Rangers side and if he keeps on playing regularly, he can scored 20-25 goals easily this season.

He told Herald Scotland: “Morelos is definitely someone who brings something to Rangers. He can be a handful and the big thing is that he’s still only 22 and will improve.

“As it stands I don’t think he’ll worry about not having a partner. The most important thing for him is that he’s playing.

“If he ignores defenders and concentrates on what he needs to do, I’m sure he can get close to that 20-25 goal target.”

Morelos has attracted a bid from French outfit Bordeaux this week, with BBC Sport reporting that Rangers have rejected a £3.75 million offer for the Colombian striker.

He is a fantastic young player and Gerrard rates him very highly. With Josh Windass gone, Morelos will have to take the responsibility of scoring goals for his side, and it is important for Rangers that he rises to the challenge.