Serie A champions Juventus have turned their attention towards signing Chelsea midfielder Cesc Fabregas, according to reports from Italian newspaper Tuttosport. 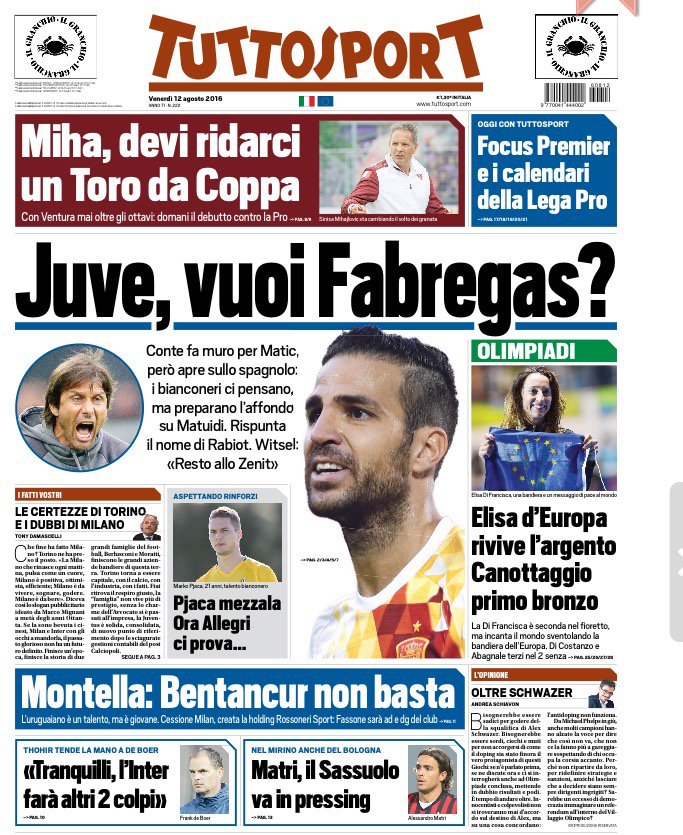 The above picture is taken as a screenshot from the front page of Friday’s Tutto edition. Inside, they have covered a big article on Juventus’s potential midfield targets for the 2016-17 season.

The Serie A champions have sold star midfielder Paul Pogba for a world record transfer fee to Manchester United earlier this month, and the Bianconeri are looking for suitable replacements.

Despite signing Miralem Pjanic from Roma earlier this summer, Juventus are still looking to add one or two quality midfielders before the start of the new season.

The Turin giants have been linked with a host of midfielders – Blaise Matuidi, Isco, Axel Witsel and Nemanja Matic – and Fabregas has joined their long list of targets as well.

In theory, Matic would have been a better option for Juve, as the club needs a solid holding midfielder with Pjanic more suited to playing in an advanced position.

According to the report, Juventus will try to lure Fabregas with a mega offer, and they may succeed in securing the signing of the Spaniard. The reason being, Antonio Conte, the Chelsea manager refuses to let Matic go, but he’d be more willing to sell the former Barcelona midfielder.