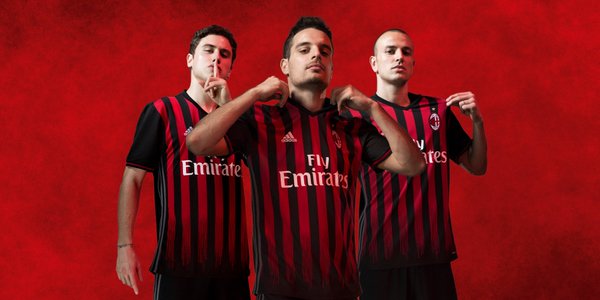 It has been made by Adidas and the 16-17 home kit has been sponsored by Fly Emirates. The new AC Milan 16-17 home shirt introduces a bold look for the iconic black and red stripes and takes inspiration from the club’s nickname il Diavolo (The Devil).

The new AC Milan 16-17 home jersey comes with thin red and black stripes on the front and full black on the back. The design was developed from this initial vision highlighting a special dripping effect where the bright red colour fades into black.

The shade of red featured in the red and black stripes is brighter than last year’s jersey and creates a dripping effect at the bottom of the shirt.

The Adidas three iconic stripes are grey in colour that gives a greater uniformity to the kit design and they are placed on the side of the shirt, rather than on the shoulders.

The AC Milan 2016-17 home kit also features a black V-neck collar with an Italian flag on the back. After a gap of two years, the Milan crest on the home shirt returns.

The new Milan 16-17 shorts are black with three grey stripes. The AC Milan logo is featured on the front while the red Adidas logo is on the back. The new Rossoneri 16-17 home kit rounds off with black socks featuring elements of red.

Like all other Adidas kits, the new Milan 16-17 home jersey has also been prepared using latest technologies. It uses a lightweight fabric which increases breathability by providing greater freedom of movement and comfort without sacrificing flexibility and resilience.

A recycled polyester has been used in preparing the authentic AC Milan 2016-17 home kit, which has a lower impact on the environment as it reduces emissions.

The Replica kits, on the other hand, features the climacool ventilation technology designed to help keep the body cool and dry through holes.