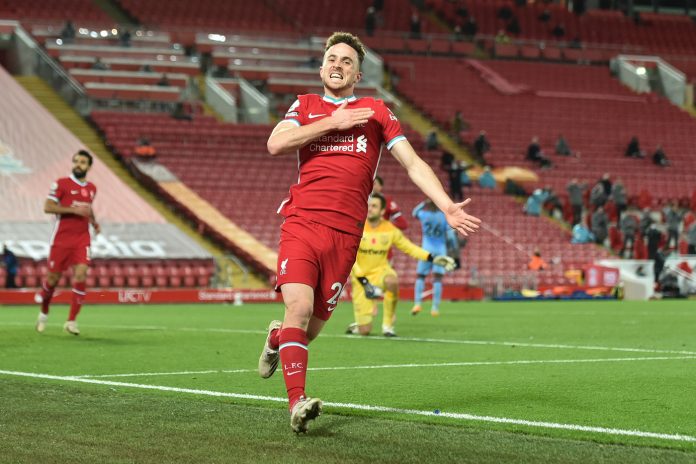 Liverpool manager Jurgen Klopp has confirmed that Diogo Jota is still a few weeks away from training with the first team.

The Portuguese international is still wearing a brace on his injury and the Liverpool manager claims that the injury was not a little knock and it will take time to heal.

Speaking at the press conference ahead of the Aston Villa game, Klopp said: “It will still take time. He is still wearing the brace, which means he is still a few weeks away from team training.”

Quote courtesy of Neil Jones (Goal.com’s Liverpool correspondent and an old friend of the site).

The Premier League champions have missed the 24-year-old ever since his injury at the start of December after the game against Midtjylland.

The Portuguese international has proven to be a quality signing for the Reds and he has scored nine goals for them in all competitions.

The Reds have failed to breakdown teams like West Bromwich Albion, Newcastle United, Fulham and Southampton in the recent weeks and someone like Jota could have made a significant impact.

The likes of Roberto Firmino, Sadio Mane and Mohamed Salah are not at their best right now and it remains to be seen how Klopp can get his attackers firing on all cylinders once again.

The Liverpool manager also provided an update on the injured centre back Joel Matip.

Klopp claims that Matip is recovering in a good way but it is impossible to determine whether he will be fit for the Manchester United game or the game after that.

He said (via The Athletic’s James Pearce): “We will try. He’s in a good way but whether it will be United or a few days later I don’t know yet.”

Here is how the Liverpool fans have reacted to the Jota update.

So the 4 to 6 weeks diagnosis was yet another lie from the club.. Klopp played a blinder in that dead rubber.

Even more annoying that he and many other first teamers played in that dead rubber of a game.

Self inflicted: Jota. His absence has resulted in 7 dropped pts in the last 3 matches. Not scheduling.

Perhaps if hadn’t played him in a meaningless game. Why he did that I’ll never know.

Worth playing him in a dead rubber then wasn’t it…