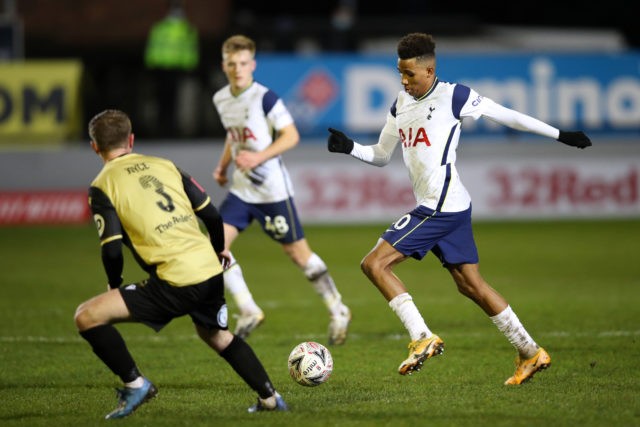 Tottenham Hotspur manager Jose Mourinho has suggested that he wants to keep Gedson Fernandes at the club, but at the same time has admitted he doesn’t know whether the midfielder will stay beyond the January transfer window.

Ahead of Spurs’ Premier League clash against Fulham on Wednesday night, Mourinho was asked in the press conference whether he thinks Fernandes will stay with Spurs or return to Benfica, to which he replied, as quoted by Football London:

“I don’t know. I don’t know. If he stays I’m happy. Again, from a selfish point of view, I’m very happy if he stays because he’s a good player and when we need him we know that we have some quality coming from him.

“Of course it’s a pity that he can’t be in the Europa League list. We’ve played already nine matches in the Europa League. I would imagine that playing in the Europa League would be a much happier situation for him. But in the selfish look at it, I would like him to stay but again we are not selfish and we think of the players. In this case, we also think about the father club so we have just to wait.”

Fernandes joined Spurs from Benfica on an 18-month loan deal in the January transfer window of 2020.

The 22-year-old played against Marine on Sunday in the FA Cup clash. He made a rare start as Spurs thrashed the non-league side 5-0, where Carlos Vinicius scored a hat-trick and Alfie Devine became the club’s youngest-ever goalscorer.

Fernandes has dropped down the pecking order at the club and hasn’t played a single Premier League game this season. In fact, he was omitted from Tottenham’s Europa League squad as well.

It was his second appearance of the season in all competitions, and he is likely to leave the north London club in January. Spurs need to pay £40 million to sign him permanently, and it doesn’t look like happening.

In all probability, Spurs will terminate his loan deal, and the midfielder will head back to Benfica. Mourinho has failed to provide any assurance about the Portugal midfielder’s future, and his exit looks imminent.