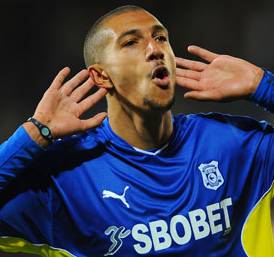 A decade ago, tempestuous teenager Jay Bothroyd was told by Arsenal’s head of youth development, Liam Brady that he would never play for the club again after the surly young striker hurled his shirt at coach Don Howe upon being substituted during an U19s match.

Brady’s vow was upheld by the club and a fairly itinerant senior career ensued – initially moving on to Coventry for the next three years, followed by largely anonymous stints with Perugia, Blackburn, Charlton, Wolves and Stoke.

Ten years on and Bothroyd, now aged 28, has finally put down substantial roots in Wales with Cardiff City, scoring 15 of the 33 goals that currently see the Bluebirds perched on top of the Championship pile and is finally beginning to convincingly deliver on his reservoir of latent potential.

After learning of Bothroyd’s call-up to the national side, Arsenal manager Arsene Wenger was quick to congratulate his former player – hinting at a certain amount of remorse in the way the forward’s fledgling Highbury career was curtailed so abruptly:

“He is one of my regrets, he left very early. But I have said many times it is important a guy has a good career, even if he goes somewhere else.

It is better than having to play in the reserves. He went down but has come back up again and we are all very proud of him at Arsenal.”

Wenger also revealed that he had little to do with the decision to move Bothroyd on, and that he believes the striker has matured into a fine player:

“The incident didn’t happen in the first-team group, it happened in the youth team. (Liam) Brady is responsible for that. They made the decision and I didn’t stand in the way because it was a disciplinary matter.”

Sometimes it is only later they realise they not only have to have talent, but need to work as well. Sometimes to go down to the Championship, there is no better education.

It is true, he had a little outcome that you can have when you are 16 or 17 but he is a good guy, and he is classy; left-footed, strong body, fantastic technique.”

As a result of his excellent form this season, and as a direct by-product of the near-farcical number of enforced withdrawals from coach Fabio Capello‘s attacking stable, Bothroyd is now within spitting distance of becoming the first ever Cardiff player to represent England at senior level – after being included in the makeshift collective that will take on France in a friendly at Wembley on Wednesday evening.

Bothroyd has today spoken of his excitement at the prospect of joining up with his new national teammates – telling local press how the thought of playing at Wembley has been keeping him up at night:

“This is the best moment of my career. I’m just happy to be part of it as it’s such an honour to be called up for my country by Mr Capello.

I dreamt of this moment and now I can’t wait to join up with the players and coaching staff.

I’m over the moon, ecstatic, I couldn’t sleep last night. I just keep thinking about being called up and all the people that have supported me.

I joined Cardiff with a determination and focus to try and fulfil my potential and [manager] Dave Jones and all the coaching staff deserve credit and have been brilliant.”

With the news today that West Ham’s cumbersome target man Carlton Cole has been called up as cover for the spry Gabriel Agbonlahor (who pulled out of the England squad yesterday after picking up a knock in Aston Villa’s 2-2 draw with Manchester United on Saturday), and that ‘devastated’ Newcastle forward Andy Carroll is likely to be robbed of his first cap by a groin twang, Capello’s striking reserves have never looked so meagre.

In the absence of the injury-bound Jermain Defoe and Wayne Rooney, and the international retirement of Emile Heskey, England will only have Bothroyd, Cole and Peter Crouch ear-marked as ‘fit’ when the squad meets to train at London Colney this morning – and you’d struggle to describe any of those three as being of ‘true international quality’ (and the same goes for Agbonlahor).

The mere fact that Capello had to include the 28-year-old Bothroyd is hardly a testament to the next generation of prodigious (or even ‘passable’) English strikers, of which none (apart from Carroll) are even so much as flirting with the fringes of national side and struggling for convincing footholds in the U21s.