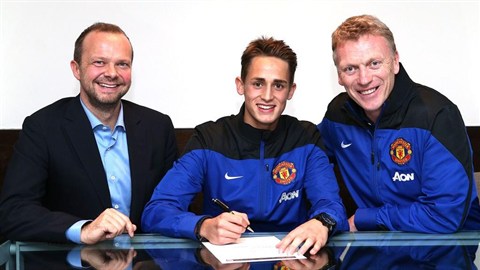 Manchester United have confirmed that star winger Adnan Januzaj has signed a new five-year deal with the club.

The Belgian-born attacker has shot into the public eye after netting twice for the Premier League champions against Sunderland in his first Premier League start.

With the youngster’s contract expiring this summer, there were fears that the 18-year-old could follow Paul Pogba’s lead and leave United for another big European club.

However, Januzaj has stated that he is very happy to be prolonging his stay at Old Trafford.

“It’s a great thrill to be able to sign for Manchester United,” he told the club’s official website.

“Since arriving here I have always felt like this was the right club for me. This season has been great for me – going on the pre season tour, making my debut in the Community Shield win at Wembley and then breaking into the team at Sunderland – it’s like a dream.

“I want to work hard now and establish myself as a Manchester United player.”

David Moyes has been full of praise for the youngster this term, and has admitted that he is delighted to have tied Januzaj down to a long contract.

“I’m delighted that Adnan has committed his future to United,” the Scottish manager stated.

“He is an outstanding talent and has impressed me consistently since I came to United in July. His balance, poise and ability to beat players is truly exceptional for a boy of his age.

“It’s great that he recognises that this club, with its tradition for developing young players and giving them a chance on the biggest stage, is the best place for him to be.”

Januzaj has made such an impression in the early days of his fledgling career that a number of countries, including England, are vying for his allegiance at national level.

Much is being made of the winger’s ability, despite the fact that he has played less than the equivalent of three halves of Premier League football. The expectancy on the teenager’s shoulders is considerable, especially given that the Premier League champions have had a slow start to the new campaign.

Januzaj is in line to feature for the Red Devils against Southampton at Old Trafford this afternoon.