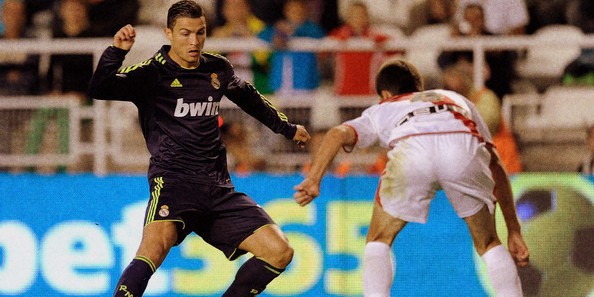 Fresh from scoring five goals against Granada in Real’s 9-1 win in the previous match, Ronaldo once again proved to the saviour after he broke the deadlock in the 68th minute.

Madrid still trail by four points behind Barcelona who earned a comfortable 4-0 victory over Almeria earlier in the day.

A game of two contrasting halves

It won’t be an over statement if we say Madrid were throughly outplayed in the first half. In the opening 45 minutes, Rayo produced 11 shots to visitor’s four and earned seven corners with a staggering 59% possession.

The story was bit different after the restart. Madrid looked more threatening going forward and after taking the lead they had better control over the game. Individual brilliance proved to be the difference again with two moments of genius from James Rodriguez sealed the tie in Madrid’s favour.

There’s hardly anything left to say about the World footballer of the Year that hasn’t been said before. He is simply a living legend.

Ronaldo reached another milestone at the Campo de Futbol de Vallecas; netting his 300th goal in 288 games since joining from Manchester United for £80m in 2009. It’s quite an achievement, considering he’s played only under six seasons at Madrid, and joins Raul and Alfredo di Stefano as the only players to have scored 300 goals for Los Blancos.

Ronaldo’s 37th goal of the season came at a cost: he picked up a caution and will be suspended for the Eibar match at the weekend. He received a bizarre yellow card for simulation when it appeared that he was indeed taken out by Antonio Amaya’s follow through.

Ancelotti was presented with a selection dilemma whether to include Rodriguez or Isco in the starting line up – the Italian opted for the Colombian and the trust wasn’t misplaced.

Playing between the midfield and front three, Rodriguez produced a master class performance at the Vallecas. His through pass to pick Ronaldo was sensational while his curled effort put the game beyond doubt. He was arguably Madrid’s best player on the night, along with Sergio Ramos.

Paco Jemez is a true hero

Being a former player, Jemez is loved by the fans and is already a cult hero in Spain. He proved his mettle at Cordoba where he took the Andalusian side to the first round in the division two promotion playoffs. In 2012-13, he led Rayo to their best ever ranking in the La Liga, eighth, and this season his side has played some brilliant football despite signing 21 players last summer with a budget no where near to Ronaldo’s monthly wages.

He is an aggressive manager who has lofty ambitions for himself. He has openly expressed his desire to manage a Premier League side and holds ambition of managing the Spain national team in future.

Managers like him bring faith that proper coaching can do wonders even without rich financial input. Rayo, sitting comfortably in the ninth place, is only testament to that claim.

Recently 31% of Real Madrid fans had urged Carlo Ancelotti to drop Gareth Bale in a poll conducted by Spanish newspaper AS. Ancelotti has always maintained that the position of his number 11 is non-negotiable, unless he is not fit enough to play.

Bale may not have the technical finesse of Isco, James or Ronaldo, but he is such an explosive player that he can win matches on his own. He was a surprise inclusion after reports emerged that he could miss out through a foot injury. The Welshman almost opened the scoring with a diving header after the restart and went close to scoring minutes later.