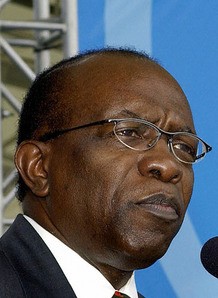 The President of the CONCACAF and Vice President of FIFA Jack Warner has stepped down from his role at FIFA three weeks after threatening to “unleash a tsunami” on football’s governing body. Trinidadian Warner was implicated in allegations of facilitating bribery within the ranks of the World’s most powerful sporting organisation. In response to his resignation, FIFA dropped all charges against him: their statutes allow them to investigate only affiliated members.

Ostensibly, Warner has resigned to concentrate on his political career in his homeland. In reality, he escapes shame, censure and possible criminal charges, hightailing it away from Geneva with his tail between his legs – a man suspended by his own organisation since May 30th and covered in the scorn of the footballing masses. His name is associated with allegations of corruption and vote-buying both in FIFA Presidential elections and World Cup hosting elections.

He has not gone quietly. He has suggested he’s been “Hung out to dry” by FIFA, with Presidential challenger Mohamed Bin Hammam made the highly visible scapegoat for the obvious ills of world football administration. His words are revealing, if for no other reason than they exemplify his lack of perspective – he seems unaware of the stigma that he has become to FIFA and the disdain in which he is held by the general population outside the Caribbean.

Though his words may contain some elements of truth – that FIFA are laying him on a sacrificial altar to give the appearance of regime change – they also, reflect the very heart of Jack Warner. Had he just added “My actions”, his words would perhaps be more accurate and unquestionably more well-received. In the past, his actions, alleged and proven, have spoken far louder than his plaintive bleats now: his quote “I’ve been hung out to dry continually and I’m not prepared to take that” sounds extremely lonesome – as if he feels he were a cancerous appendage that’s outlived it’s usefulness and now must be excised for the good of the whole. It’s not an enviable position but his words carry only a modicum of his former trademark feistiness.

Whether he is in fact guilty of many of the charges levelled at him is now, while not inconsequential, unlikely will matter. Most probably, he and his alleged misdeeds will be lost in the sands of time. His rap sheet is lengthy, but like Senator Clay Davis (of The Wire) he’s been powerful, relatively disconnected and safe from impeachment. That is until now – when nearing the end he finally understood the gravity of the situation he faced by backing Bin Hammam (also suspended) against Sepp Blatter in the FIFA Presidential election. Like any henchman Warner, though for so long a company man, was backed by the powers-that-be only while he remained functional.

Henchman may well be the word that best describes Warner: badass enough but never the Boss, a man mostly made formidable by his allies. When he became more a nuisance than a help, it was time for his superiors to let him take the fall. If I’ve learned anything from watching The Wire it’s often you must climb the ladder of iniquity to reach the ultimate villains. Rarely do big-time dominoes topple first.

While Jack Warner may not by the letter of the law done things which are illegal, he certainly has not endeared himself to the mob. He was (and still is, in Trinidad & Tobago) in a position of authority. Those entrusted with much must not just do right, but must also be seen to be doing right. Above all else, this is where Jack Warner failed both himself and FIFA. Though he would entreat himself purer than snow, he is not perceived that way and thus has failed in his role both as CONCACAF President and FIFA Vice President. By failing, he should relinquish his right to be a member of such exalted company.

We can hope this begins a new phase in FIFA’s existence and hopefully, the start of a great purge which removes indelicate, corrupt elements of the Executive and replaces them with honest alternates. With luck, any cleanout will go right to the top. Parochial Australian hopes for some kind of vindication of the money spent on a World Cup bid they had no chance of winning? Perhaps. But no doubt indicative of a football supporter hoping for the best for a game he loves. Wishful thinking maybe, but we can all dream. Football fans everywhere share the same dream.

Jack Warner wasn’t hung out to dry by FIFA, but by himself.

For more commentary and analysis, shoot across to Balanced Sports. You can also follow Matthew Wood on Twitter @balancedsports