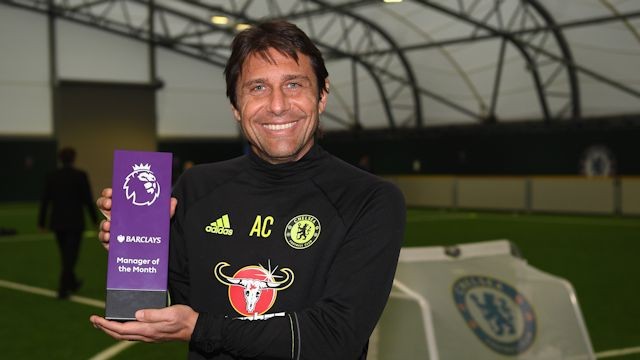 Following a 3-1 win away to Manchester City, Chelsea are now on an 8-game winning streak, scoring 22 goals and conceding 2, whilst sitting at the top of the Premier League.

Antonio Conte’s passion on the sidelines is largely responsible, after questionable performances against Liverpool and Arsenal. Conte changed the team’s formation to a 3-4-3 and hasn’t looked back.

Every game, he’s never sitting down. Conte is out there, letting his players know what is wanted from them, playing the game himself in his mind. Every goal scored, he celebrates like he has won the title. His players see his passion that helps give them the drive to win.

The passion Conte brings has also helped bit-part players from the past, such as Victor Moses. Moses, who was bought under Di Matteo‘s regime, was sent out on loan for the last 3 years by José Mourinho.

Under Conte, he has become a regular part of Chelsea‘s first team. He has made the right-back position his own. Conte’s enthusiasm and drive has allowed Moses to show the Premier League the player he truly is. Whilst manager of Juventus, Conte also showed similar excitement for Paul Pogba, allowing others to see his inner talent, and leading him to an £89 million move back to Manchester United.

Conte was recently criticised by Mourinho and Vicente del Bosque for encouraging the crowd and apparent “over-celebrating” in Chelsea’s 4-0 win over Manchester United. Conte encouraged the crowd, to get them singing and cheering. This was seen as a sign of humiliation from Mourinho, but which player wouldn’t want to see their manager celebrating and cheering the crowd on?

As the season goes on, Chelsea may not win every game. Conte’s continuous encouragement will see Chelsea become a better team, with more enthusiastic players. It might even lead them to the title.