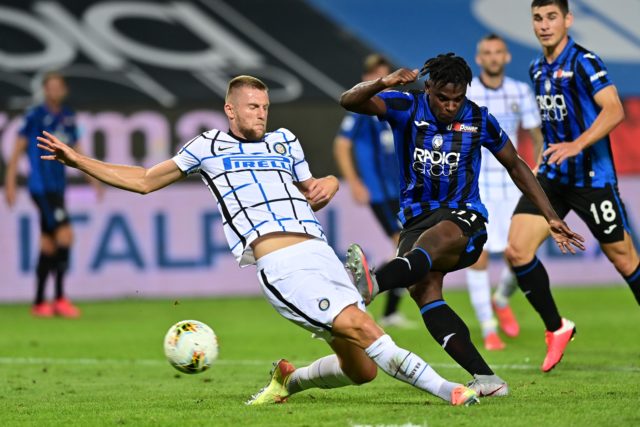 Inter Milan sporting director Piero Ausilio has insisted that the club have no plans of selling Milan Skriniar despite the interest from Tottenham Hotspur.

Skriniar has recently emerged as the prime defensive target for Spurs and it has been reported that they could lodge an official bid next week.

However, their transfer plans seem to have been dashed by Ausilio, who has emphasised that the Slovakian won’t be heading for the exit door this summer.

The Nerazzurri recently sanctioned the departure of Diego Godin and they have told Spurs that they don’t want to lose Skriniar in the same transfer window.

“Tottenham are interested in Milan Skriniar. We had a meeting but we told them we don’t want to sell also Skriniar after Diego Godin,” Ausilio told DAZN h/t Sky Sport Italy.

Skriniar finished the previous campaign as a regular on the bench as Stefan di Vrij, Godin and Alessandro Bastoni were favoured ahead of him in the back three.

Yesterday, Inter started their new league season with a 4-3 comeback win over Fiorentina and Skriniar similarly found himself settling for a bench role.

The club were without De Vrij due to suspension, but manager Antonio Conte went with Danilo D’Ambrosio and summer signing Aleksandar Kolarov to partner Bastoni.

Hence, it is clear that Skriniar is no longer an automatic starter under Conte, but Inter appear determined to keep him with the need for adequate and quality back-up.

It has previously been reported that Benfica’s Ruben Dias is the alternative target for Spurs, but they now seem to have missed out on his services.

As per Fabrizio Romano, Manchester City have agreed a £50m deal to sign the Portuguese centre-back. Nicolas Otamendi will move in the opposite direction as part of the move.