Zlatan Ibrahimovic is a rare footballer, for a number of reasons. His services are always sought after, and rightly so, due to his often stunning performances and talismanic qualities. Yet, he has so often been depicted as something of a ‘diva’; a pantomime villain in his own heroic tale.

Although capable of scoring goals of breath-taking quality, and turning games single-handedly, his public image, so cunningly composed after so many clashes and fallings-out, has inexorably shaped his career.

Rumours have been circulating in the past few days that ‘Ibra’ has become disillusioned with life in Paris, and may have already fallen out with new boss, Laurent Blanc. Talk of the imminent arrival of one Edinson Cavani from Napoli seems to have ruffled the feathers of the eternal peacock, and the ramblin’ Zlatan may well be on his way out of PSG.

Manchester City are the latest club to be tempted by his obvious abilities, like a moth to a flame. After making his mark in almost every one of the top leagues in the world of football, can Zlatan Ibrahimovic take the final step, and conquer the Premier League?

The Swede’s career has been littered with personal and team accolades. He has won the French, Italian, Dutch, and Spanish league titles during his travels. He also top scored in Serie A in 2009, and 2012; while also coming out on top in last year’s Ligue 1, with 35 goals in 46 games.

The Champions League has so far eluded the striker, who was last year awarded with the ‘Golden Foot’. A prestigious award given to players of outstanding ability over the age of 29, the ‘Golden Foot’ has previously been bestowed upon the likes of Ronaldinho, Pavel Nedved, (the real) Ronaldo, and Roberto Baggio.

‘The Guardian’ newspaper also named Ibrahimovic the 5th best player in the world of 2012.

Possessing a natural eccentricity that seems to carry him through all pressures, Ibrahimovic often revels in his media image. With all the swagger of a tuned up Mario Balotelli, and with the unshackled dynamism of Ricardo Quaresma on a ‘good day’, a neutral would surely welcome the sight of Ibra in the Premier League.

But while he possesses the good of both the players mentioned, he also falls foul to similar afflictions. Ibrahimovic can suffer from a touch of the ‘Quaresma’, and can go missing in important games. His fiery temper, perhaps named a ‘Balotelli’ in the future, has also seen him in the papers for the wrong reasons.

Doubters of Zlatan’s contributions remain rife on English soil, despite his achievements, and his four goal haul against England last year, in which he scored ‘that’ goal.

Zlatan Ibrahimovic’s words after the game hinted at a man with a point to prove, after being questioned about the English press’ ‘tepid’ view of him:

“I remember Lionel Messi before the 2009 Champions League final for Barcelona. Then he scored against Manchester United and suddenly he was the best player in the world.

Maybe now they’ll say something like that about me.”

It was quite a hit, but it did not convince everyone, and he remains something of an enigma to many a-punter.

Having jettisoned Carlos Tevez to play ‘Del Piero’ at Juventus, and with Mario Balotelli never replaced after his departure in January, there is certainly room at Man City for the big man, and just maybe his big ego too.

Sergio Aguero had a brilliant first season, and he remains a fantastic striker, despite an injury plagued season of last. Edin Dzeko, while proving to be an adept impact player, cannot really be considered a world-beating striker. A pairing of Zlatan and Aguero would undoubtedly make the world sit up and notice. 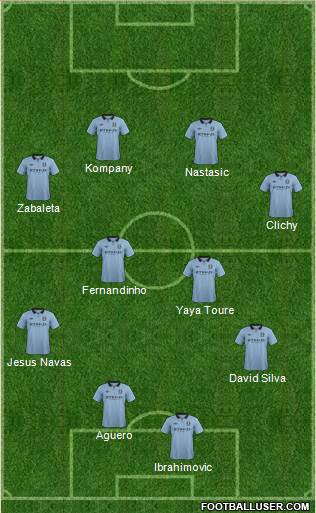 But Manuel Pellegrini has always embraced playmaking in his teams, and may make David Silva the focal point for his new City outfit, as he did with Santi Cazorla and Juan Riquelme during his time in Spain for Malaga and Villarreal respectively.

The signing of Ibrahimovic would give the Chilean a problem in implementing his favoured 4-3-3 formation; but the Swede’s strength and aerial presence would be a perfect foil for the diminutive Aguero’s strong, ghostly running off the ball, and predatory finishing skills.

Pellegrini has always favoured technical players, and Zlatan Ibrahimovic certainly is that. The man nicknamed ‘The Engineer’ will use the full extent of his squad, and flexibility with tactics and formations is so crucial to success in the Premier league. A switch to a 4-4-2 may be a well-used ploy for City if they do snare the Swede.

If Ibrahimovic does take the plunge, and sign for Manchester City, there will be many a keen eye watching from day one. We have often wondered how the very best and most famous players from abroad would fare in the aggressive, full-throttle institution that is the English Premier League.

Ibra may flatter to deceive at times, but perhaps prolonged exposure to the Swede may finally answer the question: Is Zlatan Ibrahimovic the real deal?