In October 1973, Israel and a coalition of some Arab nations engaged in a conflict known as the Yom Kippur War. The discord commenced when the Arab coalition launched attacks on several Israeli-occupied territories on Yom Kippur or ‘The Day of Atonement’ – the holiest day in Judaism.

The fighting mostly took place in the Golan Heights, Sinai and the other areas under Israeli occupation since the Six-Day War in 1967. Tensions were running high as President Richard Nixon of the United States of America called for a global nuclear alert.

Thousands of kilometres away in England, as per the norm back then, football matches strictly took place on Wednesdays and Saturdays. The Sunday Observance Act of 1780 prohibited any public place, buildings or stadiums for the use of entertainment for profit. Which meant the concept of official football matches on Sundays was unheard of. Sunday, the day of Sabbath, was meant to be spent with family and friends with prayers and hymns, and ending it with a splendid roast dinner.

As the war intensified, the Arab members of The Organisation of the Petroleum Exporting Countries (OPEC) suspended oil deliveries to all western countries that supported Israel. This led to an energy crisis in Britain late in 1973. The tidings turned from bad to worse because of a miners’ strike in February 1974. Prime Minister Edward Heath declared the “Three-Day Work Order” to save electricity.

Consequences of the three-day work order

Floodlights were banned which forced matches to be played only in daylight. So kick-off timings had to be moved forward i.e. early kick-off on Saturdays and in the afternoons on Wednesdays. The clubs presented a proposal to suspend the league and extend it to June but the Football League rejected it citing the risk of fixture chaos it could cause.

Attendances in stadiums had already started to dwindle. The price of petrol soared, employment became uncertain and add to the fact that the new kick-off timings were highly unpopular, scores of people could not afford to watch their favourite teams play.

The Football League requested the Home Office to grant them permission to schedule matches on Sundays. Floodlights were out of the question but electricity was required for the running of stadiums on match days and Sundays offered a more guaranteed supply. Fortunately, the Home Office agreed to the proposal.

On 6 January 1974, a momentous day in football history, Cambridge United hosted Oldham Athletic in an FA Cup Third Round tie in what was the first official fixture to be played on a Sunday in English football. A fortnight later, on Sunday, January 20, a dozen or so League matches were played starting with Millwall vs Fulham. A solitary goal from Brian Clark gave The Lions a narrow victory at The Den in the old Second Division. History was made a week later on 27th January as the first top-flight clash took place on a Sunday. Stoke City entertained Chelsea at their old stadium, the Victoria Ground. England and West Ham United legend Geoff Hurst scored from the spot which was enough to grant Stoke the victory. 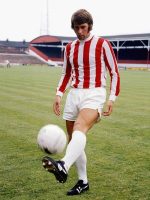 The clubs found a loophole to get around the Sunday Observance Act as well. The Act prevented an admission charge for matches, so admission was made free but you had to buy a match-day programme to gain entry to the stadium. That was enough to blindside the law without actually breaking it.

Football on Sundays gradually became conventional. But it was not universally accepted in the beginning.

“Playing football and making profits on a Sunday is wrong. We will not disturb the peace and quiet of the neighbourhood of Highbury on that day,” said then Arsenal General Manager Bob Wall.

But many people, including the then FA secretary Ted Corker, saw the benefits and most importantly the necessity of such a drastic change in proceedings in the Football League.

“Football is the national game and we should be concerned to give the public what they want when they want it. A lot of people do want to watch football on Sundays,” he said.

The Yom Kippur War was over. The oil embargo was lifted. Daily life in Britain was back to normality. But football on Sundays was here to stay.