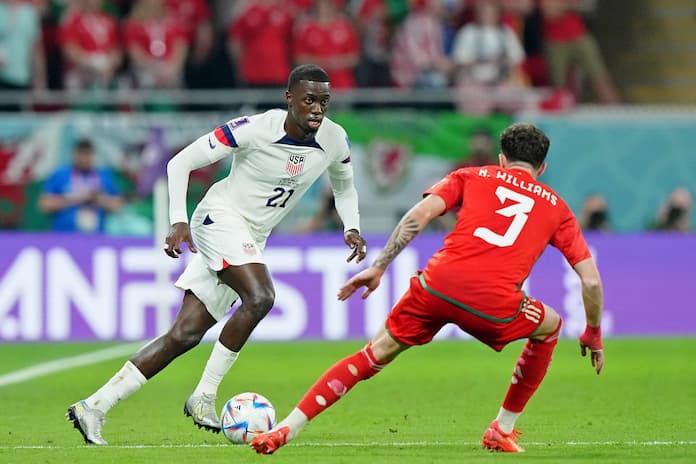 The USMNT got their World Cup campaign started with a draw against Wales after leading for a long period. It’s a strong start the US, but how will they do this tournament compared to previous tournaments?

The USMNT have a long history in the FIFA World Cup. We’ve dug out the record books to see how far they got in previous tournaments.

America featured in the first ever World Cup back in 1930. The tournament was held in Uruguay and the USA made it to the semi-finals. They were beat in the semi-finals 6-1 by Argentina.

The USMNT were declared as the third place team in that tournament.

They made it to the second World Cup final which was this time held in Italy.

They once again made it through the group stages but were defeated 7-1 by hosts Italy in the round of 16.

After reaching the finals of the first two tournaments, the USA failed to reach another World Cup until 1950.

It wasn’t a happy return to the World Cup stage for the USMNT as they crashed out in the group stages.

They finished rock bottom of their group that consisted of Chile, Spain and England.

It was an even longer wait for their next appearance at a World Cup. After a 40-year wait, they returned to the big stage at Italia 90.

Unfortunately, it was another tournament to forget for the States as they didn’t make it out of the group. They had a tough group with hosts Italy, Czechoslovakia and Austria. They failed to pick up a single point in the whole tournament.

As the host nation they automatically made it into these finals, and they made better progress this time out.

They finished third in their group but progressed as they were one of the best placed third place teams.

In the first knockout stage they met Brazil who proved to be too much for them. They put up a solid performance, losing 1-0 in front of just over 83,000 fans.

In 1994, football became soccer for the first time on the biggest stage, as USA hosted the World Cup in an attempt to popularize the sport in North America.

Dive deeper into everything about USA '94 with us below! ⬇️ pic.twitter.com/x3O35nwtPf

Another trip to the finals in 1998, but they couldn’t repeat what happened four years prior.

They once again crashed out in the group stages, failing to pick up a point in the tournament.

The USA enjoyed one of their best tournaments in modern times when they travelled to South Korea and Japan.

After finishing second in their group, that included Portugal who failed to get through, they reached the quarter-finals.

After their positive steps in the previous tournament, the USMNT failed to make it out of the groups once again.

They failed to get past the first knockout round, losing to Ghana in extra time.

Another trip to the knockout stages in Brazil, but it was another fall at the first hurdle. This time they lost to a strong Belgium side.