It surely is the most overused term at this summer’s World Cup and probably for a good reason.

Whereas as beforehand I’d only ever heard it used in a footballing context by the more ‘scholarly’ amongst the punditry circle, this summer the word has found it’s way into the stilted lexicons of nearly all of the white-van-men pundits – that have somehow inexplicably risen from the rank of ‘pub bore’ to ‘mainstream expert’ – although only as a replacement for ‘dull’.

I, myself, must concede that I am guilty of ‘over-pragmatising’ on several occasions during the World Cup, using it (and it’s synonyms) to describe nearly all of the group-stage games that featured any of the eastern European nations, Holland’s entire campaign so far and, at one point, Brazil coach Dunga‘s choice of overcoat – but I’m jaded and lazy – what’s Andy Townsend‘s excuse?*

Anyway, before this turns into a manhunt, let’s just have a quick look at the definition of the word;

Now, is it just me, or does that sound like a pretty accurate, if a little brief, overview of the last 50 years (barring some obviously notable examples) of European – especially German – football in general?

Only the thing is, it just isn’t like that anymore. 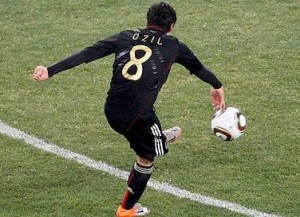 Germany have been refreshingly effervescent in South Africa (save their brief misfire against Serbia), playing with the kind of fluidity and enjoyment that we would usually ascribe to South American sides.

Spain have, of course, been luxuriant whilst in possession and, although they have had to rely heavily on the mercurial striking talents of one David Villa to punctuate their intricate and often seemingly aimless ball-work with goals, you cannot deny that sitting through 90 minutes of ‘ticky tacky’ is a sheer delight almost every time.

Even Holland, who have stuttered at times and are yet to convincingly find their feet, have dispatched all that have come before them with sporadic moments of inspiration, spurred on by the wily ways of master craftsmen Wesley Sneijder. 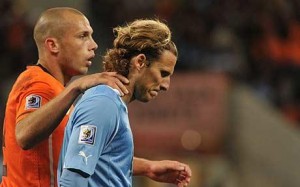 Conversely, the majority of the South American sides that have progressed to the latter stages (Brazil, Paraguay and Uruguay) have played with the kind of stoic approach to ‘not losing’ that we’d usually associate with their European counterparts.

Argentina are the obvious exception, but with a squad managed by one of the greatest forwards that ever graced the game and boasting a frontline phalanx of Lionel Messi, Carlos Tevez, Gonzalo Higuain, Diego Milito and Sergio Aguero, this can probably be excused.

Even the great Brazil, famed for their ‘samba’ stylings, have seen their generation-spanning ethos remoulded by Dunga into one that unthinkably puts defensive caution ahead of attacking flourish.

What brief moments of pure footballing magic we have witnessed from the Selecao have either been executed after pulling into an unasailable lead (i.e. whilst 3-0 up over Chile), or from individuals that have noticeably broken ranks to try something outlandish – a decision not always appreciated by their erstwhile coach.

Uruguay were the last South American team standing in South Africa (until being eliminated by Holland last night), and Oscar Tabarez‘s side made it a full round further than any of their near-neighbours – though not through any particularly adept displays of offensive prowess, but by rather being willing to sit back and soak up pressure for long periods then striking opportunistically on the counter-attack.

So, as it stands, we have are bound to having two exuberant European nations (Germany and either Holland or Spain) competing in the World Cup final after a tournament notable for it’s resolutely staunch South American dominance.

Has the world (of football, at least) gone quite mad?