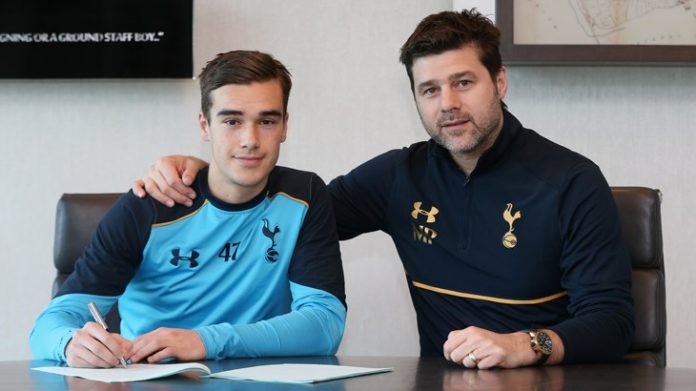 Harry Winks has penned a new five-year deal with Tottenham on Tuesday, the London club has confirmed. The new deal will keep him at the club till 2022, where he is expected to earn around £25,000-a-week.

Winks has made 17 appearances in the Premier League this season. Although most of his appearances have come from the bench, he is still being held in high regard at White Hart Lane.

The midfielder, who turned 21 earlier this month, is far from being the finished product, but club officials believe he could make the same impact as his fellow homegrown teammate, Harry Kane.

Winks said, as quoted by the club’s official website:

I’m delighted, over the moon to sign another contract with the club, commit my future even more and I’m looking forward to the years ahead.

I’ve had a lot of game time this year and it’s been everything I’ve wished for since the beginning of the season, but ultimately football can change and I need to keep that level of work rate, keep that work ethic up and keep myself going in the future.

Obviously I’m doing well on the pitch to be rewarded with this contract but ultimately it doesn’t stop there.

As soon as you’re awarded a new contract you’ve got to keep working hard to justify the reason why you got that, so that’s my intention now.

The academy graduate scored his first goal for the club in Spurs’ 3-2 win over West Ham in November. He also started in Tottenham’s decisive Champions League game against Monaco. Although Spurs lost 2-1  and were knocked out of the competition, Winks left a strong impression with an assured performance.

Mauricio Pochettino has a wealth of quality midfielders in his ranks, and therefore Winks may have to wait a while to get regular first team chances. Winks could start in Tottenham’s next game, the first leg of Spurs’ last-32 Europa League tie at Gent on Thursday.