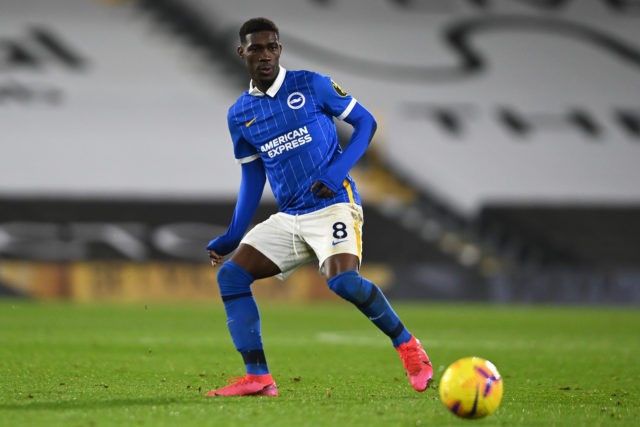 Brighton boss Graham Potter has suggested that midfielder Yves Bissouma is focussed on doing well at the club amid speculation on his future.

He has been very impressive this season and has caught the attention of several heavyweight Premier League clubs including Liverpool, Manchester United and Arsenal.

Potter has claimed that Brighton haven’t received any offers for the midfielder, and in turn has questioned the reliability of the media.

Bissouma has been one of the most consistent performers for Brighton this season, and has started in each of the 13 top-flight games.

“There have been no approaches. As I’ve said before, just because it’s in the newspaper, doesn’t necessarily mean it’s true,” said Potter as quoted by Sky Sports.

“My focus on Yves is how I can help him improve and I think he’s still got some improvement to do.

“That’s my focus with him, to try and help him reach his full potential. He’s got some work to do yet, so that’s what we are focusing on.”

Brighton are fighting for survival this season and sit two points above the relegation zone.

Bissouma – who has made 70 appearances in all competitions for Brighton – is a very good player but he is far from being the finished product. Potter is absolutely right that he still has got some improvement to do, and that he is not poised for an imminent departure away from Amex Stadium.

Liverpool are choc-a-bloc with world-class midfielders and stockpiling on that position does not make sense, especially in January.

Signing a defender is a priority for the Reds next month to cover for the loss of Joe Gomez and Virgil van Dijk through injuries. However, it will be interesting to see if the Reds at all make an approach to sign the midfielder.