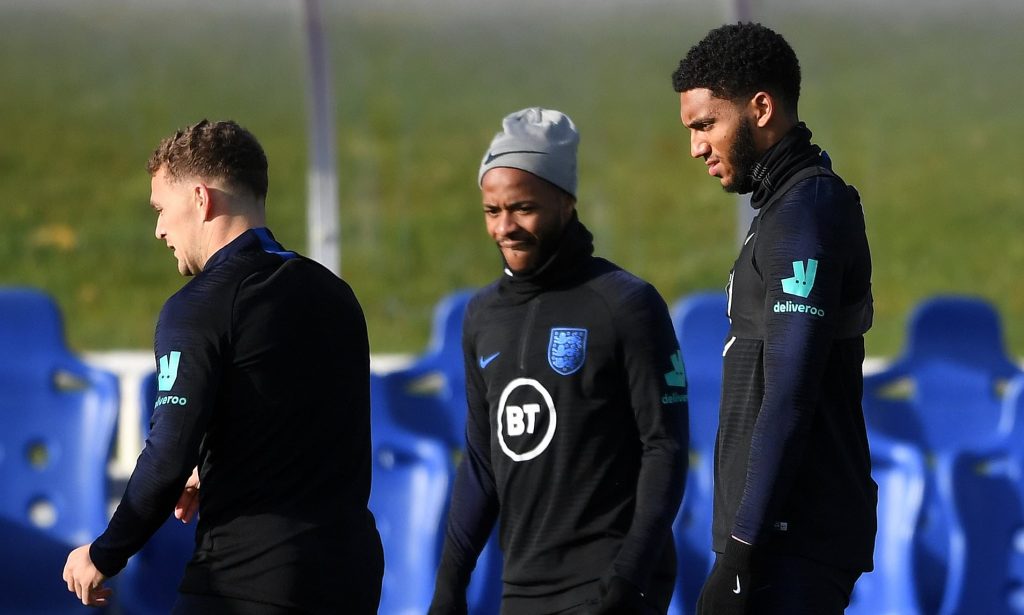 The England national team has been rocked with some bad blood in club level rising up to create tensions in international level after Raheem Sterling had a scuffle with Joe Gomez in the aftermath of Liverpool’s 3-1 defeat over Manchester City in the Premier League.

Gomez was left with scratch marks beneath his eye after the incident, but Sterling’s Instagram post after the scuffle implied that they had both made up after that fiery incident on Monday.

Gareth Southgate remained firm about how he will deal with Sterling going forward, especially after it was revealed he would not play the next UEFA Euro 2020 qualifier against Montenegro.

He explained, “We move forward. The way he’s(Sterling) trained has been exemplary. He’s with the group, that’s the most important thing. He’s a massive part of what we do – has been, will be.”

The England manager also remarked how the 24-year-old will be with the England squad for tomorrow. He said, “He’s with us for the game tomorrow. He’s back with the team on the training pitch enjoying his football.”

When asked about whether Sterling will remain punished or whether he’ll be back into the starting XI in their final qualifier against Kosovo, he exclaimed, “None, none whatsoever. We took the decision and drew a line under everything.”

Southgate agreed that it was a case of tensions in club level goading into the national level and its inevitable for rivalries to come in due to the level of competition in the squad.

The 49-year-old explained, “When you’re involved in high-emotion games it really challenges everybody’s feelings and it is a very difficult situation for everyone to come back immediately together.”

“We had that with the Champions League final in a different way. Because we have so many of our players – nearly all – playing in England, it’s inevitable that we’re going to have those games and those rivalries.”, he added.

Despite all the issues, Southgate was quite persistent in mentioning how united his squad has remained throughout the week is and how happy he himself is with their development.

He stated, “But the players are very, very close and that’s been the case right the way through the rest of the week. I don’t see that changing because they’re too tight for that not to be the case.”

“What I saw on the training ground over the past couple of days, there was full focus on the game, with everybody very together, laughing, enjoying their football again. That’s where all of us want to be.”, the England gaffer added.

The Three Lions have the chance to guarantee qualification for the UEFA Euro 2020 with a win against Montenegro at the Wembley Stadium on Thursday.

With the Sterling-Gomez scuffle creating questions about their cohesion, England will look to silence their doubters with another dominant showing.