Frank Lampard vs Steven Gerrard: Who was the better player? 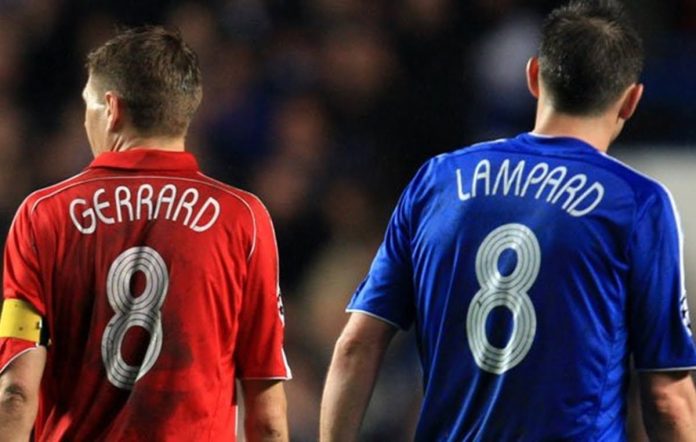 It’s an age-old debate, with seemingly no logical conclusion. Frank Lampard and Steven Gerrard defined a generation of English central-midfielders and yet, they can’t be unanimously separated in an individual comparison. They were similar in so many ways, and yet different in so many others.

Statistically, Lampard’s 211 goals in 648 games for Chelsea seems far far superior to Gerrard’s 186 in 710 for Liverpool. Yet, there is more to it than just that.

Here, we look to do the impossible. By taking a look at some broad aspects that define a footballer and his career, we will attempt to break down the Frank Lampard vs Steven Gerrard debate. The two living legends are both on the verge of calling time on their careers following brief stints in the United States with the MLS, and now would be a perfect time to look back and ask the question — “Who was the better footballer?”

There is little doubt as to who was tipped for bigger stardom at a younger age. Gerrard made his debut for Liverpool as an 18 year-old in 1998, and it wasn’t long before he was a fan-favourite among the Kop. In the 2000-2001 season, he made 50 appearances and scored 10 goals in all competitions as Liverpool won the treble of the League Cup, FA Cup, and UEFA Cup.

Lampard, on the other hand, didn’t start out as grandly. Like Gerrard, he also made his club debut at the age of 18 for West Ham United. He didn’t do badly individually, but the club wasn’t in great shape at the time. With Lampard’s uncle, Harry Redknapp, being manager and his father being the Director of Football, the fans threw accusations of nepotism and favouritism. The midfielder decided to leave that behind and move to Chelsea in 2001, when everything changed.

In conclusion, Gerrard was much more of an early-bloomer than Lampard, whose hard work and graft paid dividends slightly later on in his career.

Style of play and versatility

Both Lampard and Gerrard were assured passers, and had the ability to score screamers from long-range with stunning regularity. They also capitalised on every opportunity they got to run into the box from midfield.

Despite having a very similar style of play, there is a difference in the variety of things these two could do on the ball.

Gerrard had the advantage of pace over his compatriot, and was therefore also able to beat players with more regularity. As a result, he was also more versatile than Lampard. He was deployed as a central-midfielder for most of his career, but Rafael Benitez initially played him on the right flank as well.

There were also times when he was shifted out wide for the English national team, in order to accommodate Lampard in the middle of the pitch. It was hardly the case that Gerrard wasn’t as good as the Chelsea man, it was only that he had the ability to pull off the right-wing role just as well.

Lampard relied more on his reading of the game to be in the right place at the right time. On both sides of the pitch, he had the knack of arriving at the required moment to make a telling difference. He was blessed neither with blistering pace, nor with supreme adroitness on the ball. He was quite good at making the most of what he had. He was played in a variety of positions in central midfield, including in a defensive role later on in his career.

This is in an area in which Lampard takes the cake. Not just over Gerrard, but over most midfielders of his generation.

The Chelsea man delivered on a consistent basis for the better part of a decade. His 179 Premier League goals mean that he is the only midfielder in the top 10 list of top goalscorers in the competition. His exceptional scoring record saw him net 10 league goals or more for 10 consecutive seasons. In 5 of those campaigns, he reached the 20-goal mark in all competitions.

There aren’t too many central midfielders in the world who can boast of such a record. In fact, he also found the back of the net 12 times for New York City in the MLS this season, at the age of 38.

Gerrard was absolutely brilliant in his prime, as well. The only thing is, his prime lasted for about 6 seasons, between 2004 and 2010. He was Liverpool’s talisman during this time — the man for the occasion almost every single time.

Both Lampard and Gerrard had the ability to pull their socks up when it mattered most. Each of them have goals in the FA Cup final. While Lampard scored the winner against Everton in the 2009 final, Gerrard scored a dramatic last-minute equaliser against West Ham in 2006 to take the game into extra-time.

They’ve both also netted in the Champions League final — Lampard in 2008 and Gerrard in 2005.

This may not be the most accurate determinant in an individual comparison, but a footballer is defined by the trophies he wins.

Lampard won 3 Premier League titles, 4 FA Cups, 2 League Cups, a Champions League and a Europa League during his 13 seasons with Chelsea. He played an integral and pivotal role in every one of those wins, including scoring the goals that clinched Chelsea’s first league title in 50 years in 2005.

Gerrard, on the other hand, won 2 FA Cups, 3 League Cups, a Champions League, and a UEFA Cup. His inability to win the Premier League for Liverpool though, will forever be a blemish on his record. He was a whisker away from winning it win on two occasions — in 2009 and 2014. In the latter of the two, his individual error, a slip against Chelsea, was what led to the Reds missing out in the end. Ouch.

Things may have been very different for both men had Gerrard followed through on his decision to leave Anfield for Chelsea in 2005. That though, is a story for another day.