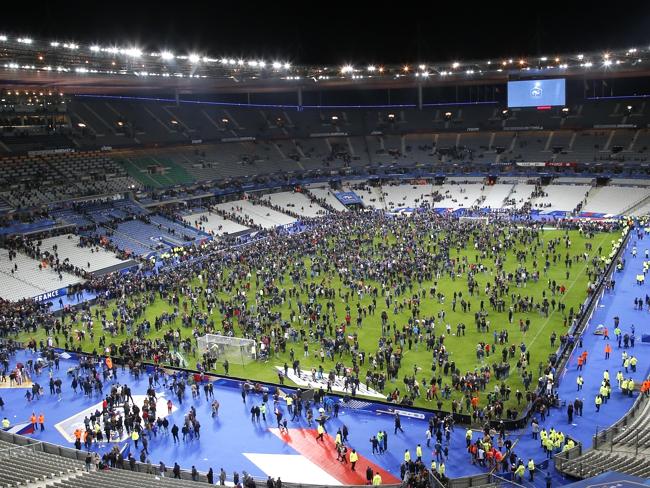 The city of Paris saw several attacks on 13 November which left over 100 dead and several others injured on Friday evening. While a series of tragic events were unfolding, France had an international friendly football match scheduled against Germany at the Stade de France on Friday evening.

The national stadium of France, which is situated north of Paris in the commune of Saint-Denis also experienced the horror. During the course of the game, an explosion was heard and the match was not interrupted as France beat Germany 2-0.

If the reports were to be believed, three people are dead after explosions at the Stade de France, according to Sky Sports. One of them was at the entrance to Gate J. After the match, the fans inside the stadium were asked to assemble on the pitch, while the players were escorted to the changing rooms.

Noel Le Graet, the president of French Football Federation condemned the attack and said FFF was in grief of the bereaved families.

“FFF is the grief of the bereaved families and relatives. The French Football Federation shares the emotion that shakes the nation following the tragic events of that Friday in Paris and around the Stade de France which took place between France and Germany,” Le Graet said in a statement released by the FFF’s official website.

Hear the explosion during the France v Germany below:

France have sealed all their borders and have tightened up the security. French President Francois Hollande, who was at the Stade de France during the match between France and Germany has declared a state of emergency after a series of “unprecedented terrorist attacks.”

France will host the next European championship and the latest tragic events in the country could raise concern over the safety for the next summer’s Euro 2016.