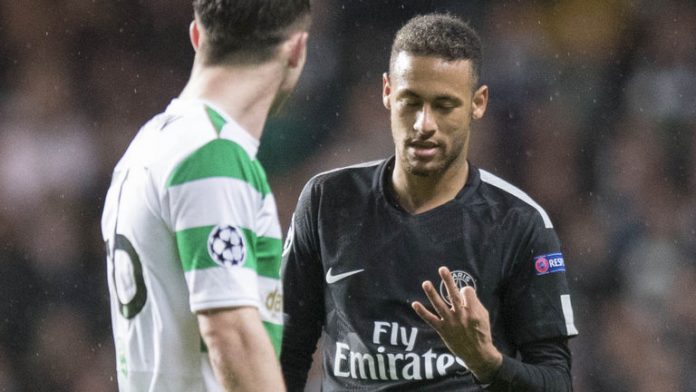 Celtic were completely outclassed by PSG, but Ferguson insists it’s dangerous to read too much into the result.

“Hands up, I enjoyed watching it myself because it really was a phenomenal display of football from the French side,” he told the Daily Record.

“But the gap between the strongest team in Scotland and the biggest clubs in Europe shouldn’t really be a laughing matter for anyone right now.

“In fact, it should come as a sharp reminder to everyone at Rangers of how much work is still to be done if my old club are to make it back to the biggest stage.

“And it should also serve as a warning to them because it was only 12 months ago that Celtic suffered a similarly heavy-handed slapping in Barcelona and look how Brendan Rodgers and his players responded after that.”

Rangers can crank up the pressure on Celtic with three points at Partick Thistle on Friday. A victory would move the Gers level on points with their big rivals, although the Hoops could re-establish their advantage when they face Ross County on Saturday.

With next weekend’s big derby game looming large, Ferguson says Celtic’s humbling against PSG could actually work in their favour.

“That could be the case for Celtic this weekend now they’re licking the wounds PSG inflicted upon them,” he added.

“But the evidence from last season suggests it’s even more likely to trigger a quick response.

“They will be itching to get straight back to business and send out a message to the rest of the league to remind everyone why they’re playing at that level in the first place.

“That’s the warning Rangers should heed because right now they’re in no place to start getting ahead of themselves.”

Both sides are solid bets to head into next week’s game with a win under their belts. A Rangers/Celtic double this weekend is priced at 8/11 and that looks an excellent wager.